When Does the Song Start?

If ever you've wanted an ice cream cone, it'll be while you're watching this music video.

Billy and his buds destroy an ice cream truck on the sunniest day ever and it's all you'll be able to think about for a while after watching.

But, why watch when you can read?

When Does the Song Start? We're rolling up to our main man, Billy Corgan, enjoying some 'comic relief' on a shady curb somewhere and the angst is palpable. Subliminals laser etch make-outs on your mind like the crimson neon of a red light district advert on an agitated adolescent's inexperienced eyeballs.

Also, this guy has no shoes... But shoes are irrelevant to Billy Corgan. Shoes, like Billy's God and Billy's naughty daydreams, are empty.

Almost as empty as Billy is to himself. Not all heroes wear capes, but Billy brought his bowtie. He's just that kind of guy.

But, deep down, he dreams of being THIS kind of guy... Yep, he dreams of making out on sidewalks in bell-bottoms with no. SHOES. ON.

It's hard, you know... Dreaming all damn day, while surrounded by ice cream and comic books.

Betcha never thought an ice cream man could sweat through his uniform... Thank god he pulls himself together, though.

Half a minute into the video, the music finally kicks in and our hero takes the wheel of his iced out automobile. This has to be about the happiest sounding song about sadness I've ever heard. The video even looks happy. I guess it wouldn't have killed them to tone the subliminals down a touch. They're kinda... Everywhere. But, the chill vibes win out.

Most of the video evokes a lightness of the heart. It's like everybody's floating on air, wind wipping through their hair, off to anywhere, because Billy don't care. Somewhere along the way, things get a little nuts. Oh, and our boy Billy might be out of a job. Oh well, they'll settle for half of the band's name instead, I guess. 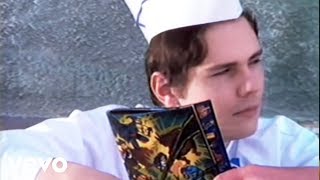 I'm not sure there's much of anything left to say about this one. Give it a look-see if you were born yesterday.

Read about Journey's hilarious video for "Separate Ways" next.