Check out all of these awesome mmorpg games by indie game studios and indie game developers. There are some real gems in the mix!

Luminary: Rise of the GoonZu takes you to a new world created out of the ashes of the old, and in this rebuilt civilization you create your own community. But this new Luminary world has drawn some lessons from human history, establishing a government based on democracy and an individuals right to free will. These principles have also led to an independent market economy, where you can freely trade stocks, real estate and other goods, as well as become an entrepreneur manufacturing new products. And if making money isnt enough, you can run for political office, and rise in the ranks to become the elected ruler of the Luminary world, the GoonZu.

When humans excessive reliance on technology went too far, the world crumbled. But as chaos ensued, humanitys will to survive persevered, as pockets of the worlds population persisted amidst lands of ruin. And these hardy band of survivors would unite and then even thrive, establishing a new era of human civilization. Drawing from their history, groups of survivors organized to form towns, and these new villages would all become part of a new world called Luminary.

Upgrade your character with more than 20 different skills.

Call on your summons, guardian spirits or even transform yourself!

Raise horses and animals to ride, from a foal to dragon!

Build your own character from wide variation of jobs and task.

Enchant various equipment and make your own products to sell.

Dress to kill, choose from a wide variety of costumes and avatars.

Real-time trading stocks, real estate and other commodities.- Start your own business with a hot product and earn lots of money.

Market prices are set by players. The Luminary world is based on capitalism.

Luminary guarantees a free and open democratic system.- Users directly elect the head of the server, the GoonZu.

A GoonZu's term as elected leader is 60 days.

Originally created by Ndoors Interactive, Luminary Online has been a steady project.

ensure our gamers can enjoy a game that last long for their time and effort spent into.

the Game masters. It's game system may be referred as old school 2D MMORPG, however,

we would like to make a statement that it is a "Stunning Retro 2D MMORPG".

exploration. The development team is still moving forward to make the game more

exciting and worth while for the gamers. Mystera Legacy is a free to play mmo with a simple 2D style featuring a player made world with crafting, construction, skill levels, tribes, and PvP.

Controls: Use arrow keys or dpad to move. Use space or the action circle to interact (read signs, chop trees, etc). Click on enemies to fight.

There is an infinite dungeon with a variety of monsters and unique loot you can find underground. Build your base above or below ground, wall by wall with floor tiles to keep your items safe from thieves. Repair your walls, put up towers, and place locks to keep raiders away. Start a farm to grow food which you can cook and bring on your adventures to sustain you. Make friends and form a tribe, hunt for treasure, and upgrade your equipment with valuable resources. Live in peace or become infamous in this sandbox mmorpg, either way you can level up and become powerful through the skill based leveling system.

You can find the leaderboards, guide, and more at www.mysteralegacy.com.

Choose from several unique looks, even change the color of your clothes, hair, and eyes!

Eventually you may discover other looks to show off to your friends in game.

Join the crew of the Celestra, possibly the last remaining ship of the Accord Defense Fleet after their home system was conquered by the Ragna Imperium. Now out in the vast reaches of space, the crew must work together to explore the galaxy and build alliances in hopes of one day saving their home.

The game takes place in the Milky Way Galaxy 1600 years in the future. Mankind has settled the majority of potentially habitable solar systems throughout the galaxy. Faster than light travel is fairly difficult with jumps between systems taking a few days for those on the vessel but several months pass in relative time for those not on the ship. This makes managing civilizations larger than a single system difficult and most systems are independent, with their own governing authority and society. There are exceptions, with some systems containing many governments and some empires that span systems.

Come join an immersive roleplaying experience unlike any other, sign up to serve your system, sign up to save your home. The main goal is to survive at all costs!

Collect resources, make friends, fight, build shelters and craft weapons. All this and more is waiting for you here in MASD!

All activities in MASD will bring your character a valuable gaming experience. The higher level your character reach, the more game features and locations are available to you.

Don't forget about trading with other players to earn valuable coins, which you can spend on resources or new equipment. Made by SlamDunkYaJunk || Totally Fungal

Please consider donating to the charity below :

This is the Omori Multiplayer Project! It's a multiplayer RP game set in world of Omori! We have carefully recreated some of Omori's maps in 3D, with over 60 playable charactersand huge open worlds, this is the perfect place to chill with friends, and maybe even make some new ones! The game is available in Browser, however we recommend you download the full version below! (PC Android ports available!)

Join our discord to keep up to date with updates! the original game, Omori, hererely on donations to keep the servers running, although completely optional, it really helps us 3

is a more casual strategy war game, it bid farewell to the endless confrontation between players in traditional strategy games! More emphasis on collaboration between players. The game integrates strategy warfare and card development gameplay, simulated business gameplay, team-dungeon gameplay, designed an urban construction model centered on prosperity and civilization, and innovated a "private territory" that did not exist in previous strategy games. The new concept of "safe collection". At the same time, players can also send business travelers to freely communicate with each other across the continents, donate supplies, and prosper together and develop harmoniously!

Facing a different world that is about to be destroyed, you, as the lord of the city, will become a candidate for the throne and have your own private territory. There you can collect, play wild, and defeat the bosses of monsters as much as you want, farm safely without being disturbed, focus on improving the construction of the capital, and create a new world of your own!

The fire of civilization is endless. After canceling the concept of combat power in traditional strategy games, we introduced the concepts of civilization and prosperity. As the heir to the throne, force cannot determine everything. Therefore, rather than letting players fall into endless battles in the game and constantly pursuing combat effectiveness, we hope that players will help each other, spread civilization and develop cities, and build a prosperous new capital!

After canceling the traditional strategy game in which players grab resources by attacking each others cities, we have opened up the runner gameplay of mutual trade between mainlands, six regions, 30 specialties, multiple runner paths, and real-time updates. Trade information, random events. Maybe not every trade is smooth sailing, but risks and opportunities coexist, challenges and benefits coexist, maybe you are a business wizard in another world!

Stopping in another world, exciting adventures are also indispensable! We have opened the Wasteland Palace that can challenge ourselves. At the same time, as your main city hall level increases, copies of the ruins of different difficulties will also be opened for you. Whether it's dangerous underground caves or desolate desert ruins, you can enjoy the fun of teamwork and multiplayer teamwork, and find lost treasures in danger!

Three races, massive heroes, legendary heroes with various characteristics, each hero has its own mission. They will accompany you all the way in your life in another world, and do their best to help you fight the enemies, fight against the monsters, and win the crown! 6 regions, 36 cities, and 36 legendary lords, this continent is full of wealth and opportunities, waiting for you to conquer! Mad Pack is an MMO game that continues the tradition of old role-playing games but brings the mechanics to a new, modern level. Try on the role of one of the three classes (Warrior, Archer, and Mage) to stop the invasion of monsters on the Shard.

The class system. Each class has its own unique abilities and battle tactics, and their combination will help you cope with even the most difficult opponents.

Rogue-like elements. Check how far you can go in the battles on the Shard.

Loot generation system. It will be very difficult to find two identical things. Choose the equipment that suits your style of play.

Hell Mode: Go from defense to offensive and reach the source of the invasion. Hell is much hotter than the surface! Aether Story is a passion project mixing the aesthetic of our most beloved retro RPGs with the modern MMO-like game play elements, allowing us to create a co-op adventure that you can play with your friends.

Explore - Adventure across a detailed world full of quests, characters, and caves. Discover the beautifully pixelated world of Aether. Currently there are two zones in the game, with new zones added every major patch.

Battle and Combat - what appears as classic turn based combat plays like a real-time, fast-paced strategic battle system.

Monster Encounters - round up and gather monsters to fight, you are in control of how many monsters you fight at a time- no random monster encounters.

Quest - There are 9 quests in the game providing around 2 hours of game play already in the game. Story driven quests will be coming soon.

Leaderboards - Hunt for chests and hidden treasures throughout the world and place in the leaderboards.

Play with your friends or make new ones - Aether Story is an always online MMORPG set in a pixel world.

Player Housing - get those decoration skills on and make the perfect pad to chill and invite your in-game friends over to.

Use the arrow keys (or WASD) to walk around.

Use the Space bar to interact with objects and talk to NPC's, as long as you are facing them. Also the Space bar is used to close dialogs or move to the next dialog.

Use the ESC key to open the main menu. You can also get to various sub menus by using the letters (I)nventory, Quest (J)ournal, World (M)ap, (B)uild, and Eq(u)ipment.

If you have any problems join us in discord.

Join Discord for suggestions, bug reports, help and more! Notice:Please note that during the Alpha your character's progress may be reset as new features are added routinely in new feature rich content patches. 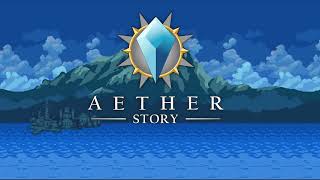 Read Voice of Aiko Prescribe Us a "Prescription Dream" next.