Some of the crazy beat 'em up games that follow are likely to follow you around. You'll have to play them sooner or later - best to start now!

Go 1v1 against another player (or a CPU) in a fighting mode. With cars. I dunno either, I came up with it while in the shower.

Controls for both game modes are 8 directions and one button. Play one-handed, if you want! Keep your other hand for... holding orange juice! Yes! Made by Phil Airdash

Beatdown Dungeon is a hybrid between dungeon crawler RPGs and fast-paced 2D fighting games. Travel through randomly generated dungeons, find treasure and fight all kinds of weird monsters. The combat is inspired by games such as Guilty Gear or Under Night In-Birth. Controls are easy to grasp and combos allow for creativity, with a lenient cancel system and the ability to summon helper characters . Develop your own fighting style by equipping badges to modify your skills and creating your own Custom Demon fighter.

This is the game's finished, released version. All characters, dungeons and features are included. Thanks to everyone who played the previous versions and offered their feedback!

20 badges to adjust your character's playstyle and give them new moves.

20 helper characters to aid you in battle.

A bunch of items to help you out in tight situations.

Lenient combo system: you can cancel into any move as long as it is stronger than your previous one. All moves only require button presses and directional inputs. No quarter-circles needed.

Training Mode and 2 Player Versus Mode.

If you want to learn more about the game's combat, download the battleinstructions.txt file.

The game has been tested on Windows 8.1 and Windows 10.

Beatdown Dungeon is a creation of Phil Airdash. Further credits can be found inside the game.

If you're interested in covering the game, you can download the presskit.zip for some additional screenshots, promo art and further info. 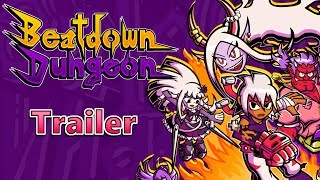 In "Halluci-Sabbat of Koishi", you will play the Satori monster Komeiji Koishi in Touhou Project, a soldier who is ordered not to quit, returns until the enemy is broken, and an adventurer who runs around in order to hold a witches' Sabbat.

You help the Human Witch find the precious potion material, and make enemies with the illusory mushroom family and many undeads. As you go deep into the miasma overflowing magic forest, in order to fulfill the agreement, you will lose Ego and embark on a dangerous journey.

This game is a 2D horizontal scroll action game of sword war system, with fast pace and high difficulty.

In the battle, the careless party will be caught by the opponent and be attacked immediately. When you see the enemy's attack and rebound, you will feel very good.

Explore the central hinterland of the deserted Gensokyo, feel the cruel law of the jungle, and confront the enemies who kill your sanity in the dark and distorted world. Use the "unconscious" ability to launch various assassination mysteries, show the skills of monsters, cut and shuttle up and down in the fierce bullet battle, and have a fierce confrontation with the enemy.

Battlefield is a place where corpses are piled up. Only with the belief of death can we live. If you want to live, you will die.

IfHalluci-Sabbat of Koishi is simple, it is absolutely deceptive, but it is not difficult for the sake of difficulty.

The original intention of this game is to let players have a considerable sense of achievement after completing something or discovering something.

High difficulty is one of the sources of sense of achievement.

The game is a horizontal action game, including enemies of different forms and styles. Some will release high-intensity barrages;

Some will launch a pressing pursuit step by step;

Some are unfathomable magicians;

Some of them are swordsmen as quiet as water.

Only by defending, dodging and attacking at the right time can we defeat the enemy.

As the game progresses, players will understand all kinds of unique skills and secrets.

It can not only effectively improve the combat effectiveness of players.

Provide all kinds of new methods to defeat the enemy skillfully.

And all skills have their own unique story, contains the unique cultural connotation of the Touhou Project.

It is hoped that players can get the pleasure of defeating strong enemies, the satisfaction of collecting moves, and the enrichment of seeing and hearing.

NOTE: This is a student project created in an educational setting by senior Game Development students at the Savannah College of Art and Design.

Team up with your friends or go solo to save the city of Jamford from sound-hungry monsters! Keep in touch with the news to find citizens in need of help.

Attack on the beat for stronger hits, and hold to the next beat for a powerful charge attack.

Choose between four characters, each with their own attack style and role in your team's music.

Build new weapons to make new sounds and instruments for your character!

Explore Jamford, a procedurally generated city with a different layout every time you play! Toxic Pink is a nervous third person Beat'em up in which you play as Lana, a popular soda brand model and henchman for an important Mafia of humanoid pigs. 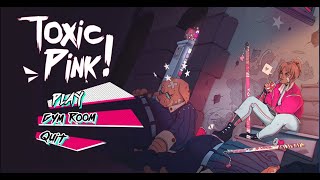 One day you fell into the virtual world and asked to train an AI.This is a danmaku game, but you will not challenge the bullet-hell by yourself. Raise an AI to deal with all kinds of danmaku.In essence, this is a simulation game. You can solve all kinds of difficulties by upgrading AI to fight monsters and adjusting AI parameters!Note: The main stages of this game are basically operated by the mouse. There is another challenge mode that can be operated with the keyboard or gamepad as the traditional shmups, but it can be assisted by AI. Would be possible to have a better Street Fighters 2 on the Amiga?

This is an attempt to recreate a simple combat for testing purposes using the Scorpion Engine and it came out very promising, even thou there is no intention to continue working on it.

Maybe someone can take inspiration and work on a full remake? The Amiga community would be amazed :)))

The game is very buggy but allowes basic moves like walk, jumpfall, punch, kick and hadouken.

The moves can be performed only on the keyboard

I felt the need to spend a fewmore hours on the demo,here is the outcome:

Added (fake) character selection, (cursor moves and has some sounds)

Improved palette for HUD, VS screen and win screen

Added Ken walking towards Ryu if he's too far away (buggy)

This is only a tech demo andis not intended to be a finished product and will never be.

DO NOT ask for improvements, there won't be any.

Copyright for SF2 goes to the respective owners. 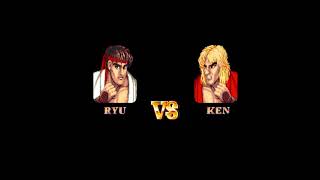 Read The Nutcracker - Tchaikovsky's Triumph next.