The Making of Denver Moon: A Multi-Media Experience

May 6, 2018 by Joshua Viola
art artliterature Being an author is similar to a day at the amusement park.

Each time you get in line, the themes, rules, and tracks change. A short story might morph into a novel. Your character might have hidden talents or an identity you knew nothing about when you wrote those first words. Your linear story might jump the tracks and go into a freefall, unsure of where it'll land.

It’s part of the fun and challenge of being an author.

Denver Moon began while I was working on another project. I was co-editing a cyberpunk anthology called Cyber World. Reading so many fantastic submissions by some of today's best science fiction writers inspired various stories of my own. I knew mine would be centered around a private investigator on Mars, but I needed some help to flesh out the details, so I enlisted the help of Warren Hammond, author of the KOP novels.

After meeting for drinks a few times, Warren and I nailed down our characters and plot:

Denver Moon, P.I., works the tunnels of Mars City, a struggling colony ravaged by the mysterious red fever. Lucky for Denver, she’s colorblind and therefore immune to the fever. While investigating a series of violent crimes linked to the disorder, Denver discovers a cryptic message left by Tatsuo Moon, Mars City co-founder and Denver's grandfather. The same grandfather who died two decades ago.

With the help of her sidekick, Smith—an artificial intelligence installed in her Smith & Wesson pistol, she sets out on a quest to find the answers she hopes will shed light on the origin of red fever and the mysteries surrounding Tatsuo's tragic death.

Early on, we realized we wanted Denver Moon to be more than just a book. We wanted to give our readers a transmedia experience—a franchise that would exist across multiple platforms. I had experience with this before. My debut novel, The Bane of Yoto, was also developed into a 3D comic book app for iOS and Android devices. This allowed users who might not be avid readers to engage in Yoto's world in a visual way.

My publisher at the time, FiXT, is also a music label, so all of the content related to the book was accompanied by audio from Celldweller—a musician in the film and video game arena (Transformers: The Last Knight, Blade Runner 2049), which aligned with my book's demographic. Then came my sophomore release, Blackstar. I was hired to flesh out a story Celldweller had developed in his albums. While writing the novel, Klayton, the man behind Celldweller, would take each chapter and compose new music based on the prose. When the book was released, we had an entirely original score to accompany the project.

Fast forward to 2015 and the birth of my publishing company, Hex Publishers. Our first anthology, Nightmares Unhinged, was released with a PlayStation 4 dynamic theme as a means of engaging gamers in the horror genre. It worked, and we had tens of thousands of installs. Not long after the book's release, AMC network licensed the book's cover art (by Aaron Lovett), for use in promoting season two of their popular TV show, Fear the Walking Dead.

Circling back to Cyber World, I decided to go back to my roots and release the prose with a companion album, licensing audio by musicians at FiXT. On Election Day, 2016, Cyber World invaded reader's eyes and ears. 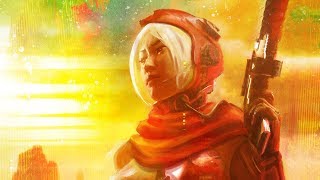 Now here we are, on the eve of Denver Moon's release. On June 5, 2018, Denver Moon: The Minds of Mars novella will be released, along with a variety of content across multiple landscapes.

Learn more about Denver and her rich world at DenverMoon.net.