The Graffiti Art of Banksy and An Exercise in Artistic Shredding In the gritty world of graffiti, anonymous artist Banksy is held in high regard. His work, often times satirical in essence and always controversial in format, forms the basis of enduring public fascination.

Banksy's artwork is coveted by many a seasoned art conoisseur and when his unprecedented installations turn up unannounced, people can go so far as to remove entire walls in an effort to sell them.

As an individual, Banksy is shrouded in mystery and his actual identity is debated to this day. Although the artist has done interviews in the past his identity so far remains a mystery.

What is known is that his artwork is widespread in subject matter and carries a very characteristic style, emphasizing stencils and surreal, metaphorical image combinations.

Banksy has sold photographs and reproductions of his street graffiti. However, a recent stunt he pulled with one of his works of art entitled "Girl With Balloon" took many by surprise.

The piece, when put up for sale at auction, was bidded on by multiple attendees, with a winning bid in excess of $1M. However, just as the winning bid gavel came down, the artwork itself slid down through its frame, shredding through a cutting contraption embedded therein.

Despite the mischievious shock of the incident, the winning bidder bought the item anyway. Many believe the stunt will actually increase its value.

We've gathered up the video in question showing Banksy himself testing his trap frame and the incident unfolding as well as a number of Banksy's best installations from his extensive graffiti portfolio. Check them out and enjoy! 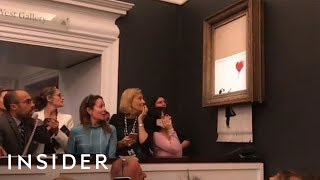 Read up on an Asian artist with graffiti-style art...