Check out all of these awesome puzzle games by indie game studios and indie game developers. There are some real gems in the mix!

>>Silo27: crashlanded is a third person adventure game focused on exploration with puzzle and combat elements.>>An interstellar cargo ship, while entering the galaxy, crashlands on a planet that should not have been there.>>Explore and fight your way through ancient ruins to find the portal that will bring you back on Earth.>>FEATURES>>Explore ancient ruins on another planet>>Collect artefacts>>Solve puzzles>>Fight different types of enemies>> After crash-landing on a structure orbiting a distant star, work alongside your robotic friends to solve puzzles and uncover the true purpose of the mysterious outpost.>>Puzzles>>Control multiple characters per level, one at a time.>>Their actions are recorded, and will "play back" during subsequent turns.>>Use strategy,timing, and creativity to help each robot reach their goal.>>"Desync" and "re-sync" your way to victory!>>Features>>Mixture of puzzle levels, story, and traditional platforming.>>40 levels, and multiple units with unique abilities.>>Branching, non-linear overworld.>>Credits>>Art, coding, design, and concept: Ghast>>Music: Of Far Different Nature>>Sound Effects: Cyberleaf Studio>>Future Plans>>Level editor (mostly done already)>>Level sharing system>>Made with pygame and OpenGL

>>A 2D maze puzzle game with the feel of a runner. The two characters are alternately controlled, where the objective is to open the correct doors of the dungeon to get to the exit as quickly as possible before everything collapses. The look is reminiscent of classic video games with more minimalist touch of pixel art. There are 60 levels until the end of the game, and after each stage, a score is shown based on the time taken and items collected.>>The game will also have an area to check the general ranking and ranking by stage of all steam players. >>Ghost is a first-person horror game made in realistic 3D graphics that immerses you in an atmosphere of horror and scares you in every way. The gameplay consists of collecting notes and videotapes, solving riddles and escaping ghosts, as well as other mechanics inherent in any horror game. The main goal is to survive and be saved.>>Brief background:>>Ghosts live everywhere, in our cities and villages. These mysterious creatures walk and fly through us, and what's more scary, they can physically affect us, or even kill us!>>So, the hero of this game was "lucky" to meet these unusual creatures and not only meet, but also feel in his own skin all that ghosts can be!>>The main character, an ordinary unremarkable guy named Klim, ended up in a rather strange abandoned place. From the very beginning, the place that Klim got into begins to catch up with negative emotions, and the more the main characters are in a strange building, the more they become convinced that he is not alone there.>>You have to overcome your fear, going through gloomy locations for the main character, solving various puzzles along the way and trying to understand what is happening, how you got here, and most importantly, how to get out of this place. Description>>After uncovering a regicidal prophecy, the old Mage must leverage the power of mindbody dualism to cross dimensions, posses the bodies of others and ultimately foil the assassination plot on the King to whom he serves.>>Made for the GGJ 2022, with the theme Duality.>>>>Switch Bodies>>>>>>Solve puzzles>>>>>>Use new abilities>>>>>>Discover the prophecy>>>>>>Credits>>Art Programming:Gabriel Bissonnette>>Music:Vincent Salgueiro>>3rd party assets:Characters [Miniature Army] by MiMU STUDIO >>ShadowRanning - This is a runner game, you are in the role of a black Bulby cube, trying to overcome all the tests created by artificial intelligence. Avoid the red squares to complete the game, calculate all the outcomes of events.>>music by 8BITF Dead Dating Official version:>>Early Access Start now!>>A romantic summer date party gone wild! A sweet party becomes a murder scene...>>you have to find a way to survive in an isolated mansion on an isolated island with ten guys! Can you rescue your lover and catch the killer?>>Publishing Schedule ( Current version is Early Access v 0.3.4 )>>Features>>Gameplay system>>System Requirements>>This product does not contain the Guide app, the Guide APP APK file of the download list is for support to the Previous Campaign. To purchase the Guide App please visit theGuide App Lite. Thanks. :)>>My Patreon is open now, If you want to support my project, you can click the button below. and you can get my hi-resolution Artworks there.:)>>>>Do you need help? Do you wanna say something?Come to our Discord to chat anddiscuss the game guide with other players! :) 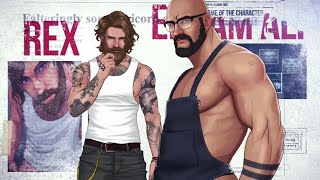 Read The 4-Voice SKULPT synthesizer on Kickstarter next.