The show's heroines embarked on a gloriously bizarre and blatantly psychedelic trip through a disturbing dimension of colorful caricatures.

Not up for such a literal trip?

You could change trajectory at the sight of syrup-dispensing dogs and distressingly delicious pancakes.

Their trip took them through precarious pitfalls in search of macaroons. Yes, macaroons. Why are we so interested in this brief delusional display? Well, the art is just odd enough to tickle our tastes here at Odd Nugget.

You can thank Mike Perry for the atypical animation in this typically unanimated show.

But surprisingly, Perry wasn't really much of an animator in the first place.

This brief and bonkers animation was his first serious foray into the art form.

Never too late to try something new, huh? "Mushrooms," the episode in which Perry's animations appeared was no guess at how the drugs affect people either, Perry made sure of that.

Before he began on the animation, he decided to take a psylocibin-aided trip of his own.

Fractals and the standard, goofy, spaced-out fare of such flights of fancy inspired his drawings and eventually became part of the show. Mike's ideas for a show of his own entitled "Island Life" were just as trippy - an alcoholic artist being the animated star.

Who knows? We may soon take another trip with Perry to an even more unusual realm. 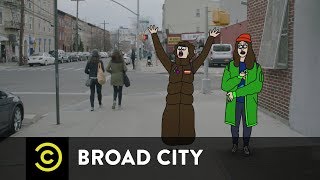