A Sampling of Drugged-Up Musician Moments

U2 - I Still Haven't Found What I'm Looking for 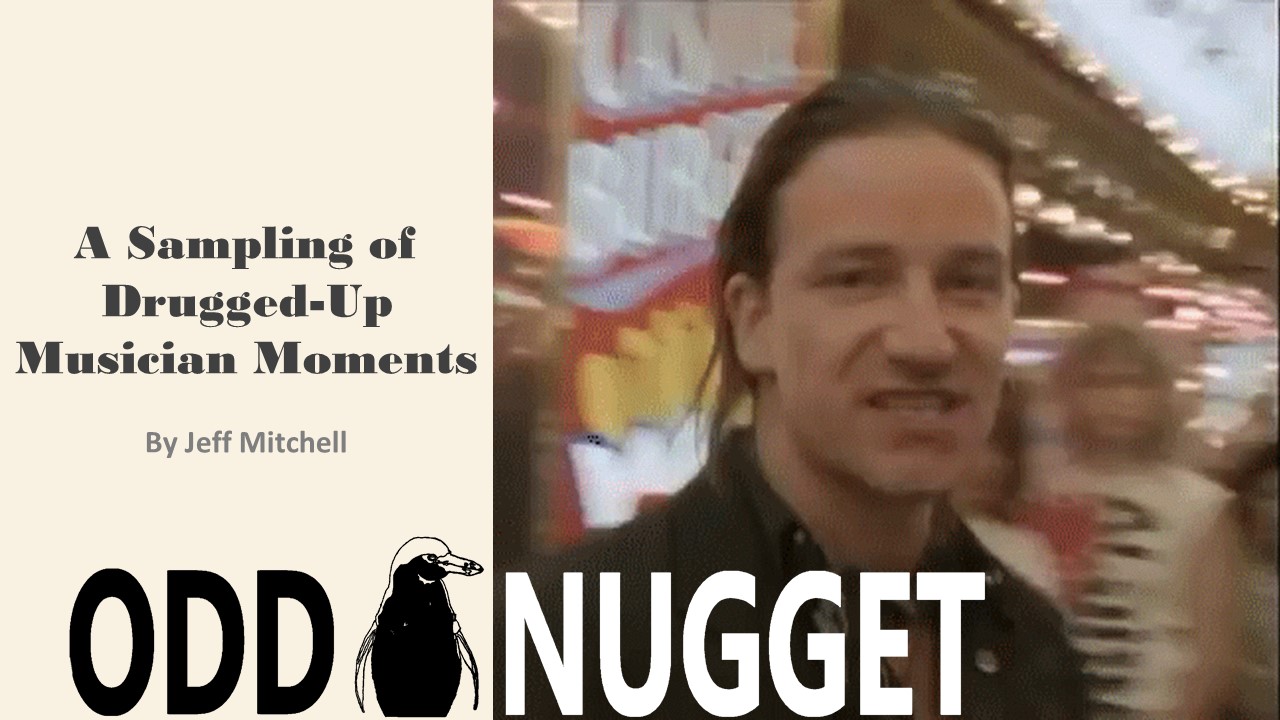 Ah, musicians and drugs... Members of "Tool" touched on the importance of this tenuous relationship in their memorable epic, "Third Eye."

Though the stand-up act serving to open the aforementioned track merely touched on the appreciation loyal fans ought to have for drugs as the likely brain-fuel they are for dedicated artists the world over, the actual effects drugs have on these same artists are all-too-often overlooked. For the life of me, I don't see why.

If a ten-minute crotch-kicking compilation qualifies as entertainment these days, then surely famous people's drug-addled antics immortalized on film ought to as well. Moreover, I wonder just how many odd moments in televised history might as readily be attributed to lingering coke traces in the blood stream. Coke is a famous-people drug, right? I'll save these important questions for a later date.

The inclusion of drugs is a pivotal element in the delicate formula that is this cover song and its accompanying video.

Drugs to make the idea of covering Frampton's 'Love Your Way' reggae-style seem valid. Drugs to unite a band as motley as this crew for such a purpose. Drugs to dress a man in a muumuu for no apparent reason at all.

The takeaway? It takes drugs to make a Big Mountain out of a mole-hill.

However, as circumstances become dire and assorted band members are called upon to keep it together long enough to film a hodgepodge music video, things can rapidly spiral out of control.

Case in point: a certain band-mate's apparent state of intoxication 'inadvertently' slipped through editing - surfacing in the final video as the single greatest 'high-guy' moment of all time.

Getting 'connected' must be British drug lingo I haven't the privilege of understanding.

Do it again! The recurring command to repeat some unknown action aligns well with the shrouded message, "do more drugs."

Unlike the previous video, this one is a testament to intoxication in its totality - going so far as to induce trance-like states in (presumably) sober viewers.

Images of blood streams and blossoms fade in and out of view - assaulting our senses non-stop. Yes, it would seem the potency of the drugs these performers have ingested is sufficient enough to transcend their reality and affect ours.

On a less metaphysical note, it takes some sort of chemical overdose to voluntarily don this creative man's bold, baggy outfit; no small feat of tailoring.

As the unofficial poster-boy for meth and corporeal fluorescence, he's certainly done his duty.

U2 - I Still Haven't Found What I'm Looking for

It amazes me how this video can be so widely known yet so poorly understood. In short, it is one band's quest for drugs.

Don't believe me? Watch it now. See the desperation in Bono's eyes? Notice his futile attempts to sell kisses to the unwary, for drug money. Behold the restrained rage as he shouts in his annoyed band-mate's face. As a kite might soar, so does he...

Poetically, the video unfolds as a metaphor for confusion. Vision fades from black and white to color and back again, time moves slowly, the cars and people of the strip appear to whirl by in a cloud.

You're dazed. A drink, some lines; that's all you really need. A few pills, some Trident, a couple slices of birthday cake and you're golden, right?

The dull ache beckons... Run through the fields, climb the highest mountains, scale these city walls for the drugs you're looking for.

If you've stumbled across any other drugged-up musician moments, do send them my way as I'd love to witness them myself. Who knows? I may just continue this exercise as a series made up of your suggestions. If nothing else, be forever odd!