Take on a new challenge in any of these amazing new cute fighting games fresh off of steam and itch...

The development of civilization accelerated with the discovery of Astra metal, but the light emitted from the mysterious ruins led mankind to the destruction.The Human Alliance succeeded in sealing the ruins, and the world seemed to slowly become stabilized. But...

Features of the game

Tiny Crack' is a story-based, stage-breaking action game in which you must defeat all enemies within the time limit.

In a world of confusion, you start the game by selecting one of the two characters, Kassel and Aska.

Use each character's skill and switch characters in time in order to break through the stage.

Within the set time, you must deal with all enemies in the block. Don't be vigilant. It can be difficult to handle.

Organize a team and set potions.

Get additional companions and upgrade them during the battle process. (Important: Play the downloadable version for much better framerate, better stability, as the HTML5 version is prone to crash and somehow fails at the last brawl zone)

Dere Dress Alice is an unfinished prototype released for the Fragment Jam. This means it's incomplete and is full of bugs and possible crashes (especially on HTML5).

It's a Beat-em-Up where you can alter your size at any point in time (assuming there's space, check the radar) and you fight against the forces of Neo Wonder (it's Wonderland). Try to get a high score by destroying foes, windows, cars in quick succession!

Year 2001. For far too long, Storm England was fighting a secret battle underground against Neo Wonder, a huge secret empire filled with strange monsters. Worn out by the war, the King of Storm Engulor abdicated, and the General of Neo Wonder, codenamed "Acid Ace", took the throne. The people hoped for peace under enemy control, but the truth was far worse.

Every day, the Neo Wonderlims, citizens of Neo Wonder, pillaged the sacred land of Storm Engulor, demolished buildings, attacked humans, cut all connections to the Internet, and burned their books: but more specifically, they were burning "Alice in Wonderland" books.

But the Engulorians had enough. Searching for a way to defeat the Neo Wonderlims, months of hidden research gave a fruitless result, but after a researcher read through one of the last copies of "Alice in Wonderland", a hidden secret code was located in the words. In the capital city of Lyndun, a secret team assembled the fruit of the this secret code: an outfit capable of changing the shape of the wearer. But it was a prototype, and the Neo Wonderlims eventually found their lair, killing all the researchers, and burning the outfit to a crisp.

Angered by the discovery that the humans are trying to fight back, "Acid Ace" sent out his army of Domino Soldiers, Kepler Aliens, and Lightbulb Parasols to eradicate the human race. Along the general was his three Majors: "Phenomenal Fang", "Planetary Daughter", and "Pyrotechnical Bang".

While in the metro, a school girl, dazzed by her own music player, got hit by a flying piece of burning fabric, destroying the entire train and it's users. The fabric was the key part of the secret outfit, and transformed the injured girl into the only one who can save Storm Engulor: Alice!

With the new outfit, Alice can grow and shrink, allowing her to traverse obstacles no ordinary human can traverse, and handle hordes of foes without breaking a sweat. But she'll need to be careful, as being big doesn't make you invincible, and you're a slow, big target. The dress also allows Alice to shoot dangerous sparks when she's normal sized.

It's a fragment. I tried to add keybind explanations, but some mechanics might not make sense since there are no tutorials. Read this if you need help:

You can rebind the keys and use a controller.

The Lightbulb Umbrella doesn't take damage with it's umbrella up. You need to be big, stand in front of it when it stops moving. It will have it's eyes bulge out, and chase under you. Shrink or get out of the way to beat it up after it touches water (it will be grey).

To break the wood, you need to be big.

The small key can only be collected when small, the big key only when you're big. You can change size at will afterwards, but you need to be small to open the small door and big to open the big door.

The star shooting can only work if you're small. Also, it uses the SUPER meter ressource (orange bar), but NOT the number SUPER. If the orange bar is emptied, it will stop working unless you charge it by beating foes.

By holding UP when shrinking, you'll shrink upwards.

You need 1 SUPER point to use the super. It's a screen nuke.

The final brawl is a long series of waves (10), but it does have an end. Finish it to get a rank.

You can grab the cannons that fall in the starting area by being big and letting them collide with your dress. They'll shoot in 5 directions as long as you're big, but once you shrink back, they'll dissapear!

If an enemy is off-screen during a brawl, get big to expand the field of view.

If you lose all your HP, there is no game over coded for that scenario. Press ENTER (pause) to exit the game in that case.

The game hasn't been memory-leak tested. I played two playthroughs on a single run, but just be careful.

This is the first time I've exported an HTML5 version of a game.

A lot of menus and UI elements where ported from my current game, Hegemone Pass.

I've failed to implement Wind Currents in Hegemone Pass but somehow, I created them in this game and haven't ported it to Hegemone Pass yet!

Broken windows and Lightbulb Parasols with their parasols up still rack up Combos, but that's a bug.

The title was made of at the last minute when fixing the game's bugs for this release.

Want to know about how this game got made? Check out the TXT file "Stepback" inside the Windows version download! 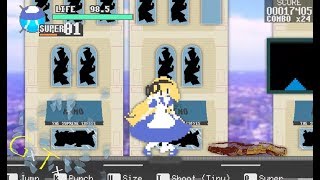 You can play cooperatively,with friends operated by High performance AI, and it was developed with the utmost aim of being able to enjoy the fun of adventure together with friends even in single player.

The AI characters not only fight, but also jump and step along gaps and creases while moving to follow the player.

A heartwarming story about girls' daily lives, friendships, and adventures.

This Is Japanese version. Developed by MAGES. Inc. and published by Degica

Once upon a time, Momotaro (a.k.a. Peach Boy) and his allies, Kintaro and Issuntaro, wiped out the tribe of ogres who plagued the Japanese countryside, and everyone lived happily every after.

Centuries later, Momotaro's descendant -- bored of life as a bar host (!) -- decides to run amok and terrorize the Japanese countryside with mononoke and yokai and all those other Japanese mysticism-related things you've probably heard the tiniest bit about from some anime somewhere. Not because it's his destiny or anything; just because he CAN.

And with the hero now serving as villain, it's time to flip the script and turn the villains into heroes! Or... comparatively less bad villains, at least? Ran, Hana, and Yume -- sisters who are descended from the very ogres Momotaro once took down -- must join forces with a kitty cat named Iroha who serves as their mentor, narrator, and caregiver (?) to rid the world of the pink, peachy menace and his fairytale folkhero-turned-villain flunkies in this action-packed tongue-in-cheek Japanese-inspired beat-em-up other-words-separated-by-hyphens romp-o-rama!

a 2D sprite-based beat-em-up with multiple playable characters! Three of them, in fact! Play alone, team up with friends in online or offline multiplayer, or mix and match as the spirit moves you!

a chance to take out your aggressions on unsuspecting Japanese demons and ghoulies! Unleash ground-shaking combos, counters, and special moves with ease, and chain 'em together to rain devastation upon all who stand in your path!

a showcase of weird and wonderful zombies and demons and crows (oh my!) who all want you dead, dead, dead!

an RPG, kinda, sorta! I mean, it's got experience, coins, and other loot you can use to strengthen your characters and their skills, so that's all it takes, right? Right?!

So get ready; victory is in reach! It's time to go out and POGO KIDS!is a competitive game about 2 kids having a jumping war on pogo sticks one afternoon in 1922.

It's a project in deep learning AI,all AIin the game learned how to play from real human players.

When you wake up in Hell one morning, you have two options: stay where you are or attempt the impossible finding a way out.

Explore this comical and sometimes scary take on the afterlife. Dodge boulders in Sisyphus Valley, run from a swarm of mysterious phantoms, and defend yourself from the army of monsters who seem to be crawling straight out of your nightmares. Get acquainted with the many people 'people' in the loosest definition of the word who inhabit this hellscape world. Some will be friends, some will be foes, but its not always clear which is which! You'll have to make your own choices as you navigate your way through the afterlife, so you better determine fast who you can trust and who is out to get you. Jelly Brawl: Classic is a FREE sticky and destructive multiplayer party game where you gotta flop, and pop your way to the top! Fight alone or against friends and experience the mayhem of the Classic mode as you struggle to be the last jelly standing!

SLIMEY PHYSICS BASED MAYHEM! With simple point and go controls, Jelly Brawl is easy to pick up but hard to master. Without quick reactions and well timed taps, its easy to lose control of the slick jelly.

UP TO 4 PLAYERS VERSUS PLAY! Face off against up to four of your friends in local and online multiplayer! Fight to be the last jelly standing on the stage or take the victory in one of the many mini games!

A WHOLE SLEW OF MINI GAMES! Duke it out in "Classic mode" where you fight to be the last jelly standing while facing off in a variety of boss rounds in classic mini game fashion.

Local Multiplayer requires the use of controllers. Only one player can use a keyboard and mouse. It's just a spider with a gun

I never planned on releasing this anywhere, and I don't plan on finishing it.

Maybe I might come back to this at one point, but don't count on it

For GMS2 users:: you can grab the source code over at my Patreon! 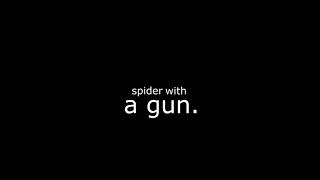 Read Tree Art Like These Beauties Will Make Your Day - Odd Nugget next.