Best of the Bad - 'Separate Ways' by Journey In this series of posts, I hope to elucidate the many finer points of what I deem to be the world's worst music videos. From bands both popular and obscure, there are plenty of worthy specimens quivering for careful dissection by yours truly.

And so, with a smile, some popcorn and eyes of steel, I begin this great undertaking with an easy target, "Separate Ways" by Journey.

Join me, friends, so that we may set off!

We're invited to embark on a journey of love in the colorful, desolate space of some nondescript port with five of the least likely longshoremen imaginable. Instruments materialize from thin air; a guitar, a tiny bass and a classic Casio synthesizer supported by $40 worth of PVC tubing and $2 of chrome spray paint. Clearly, we're in for a treat.

Wait one second; it has come to my attention that they aren't longshoremen at all, but a band of rockers. Rockers on a mission. Rockers with a cause. What noble necessity unites these five men, you ask? I'm not sure, but a woman is about to walk by. Let's let her legs do the talkin'.

Is she decidedly unremarkable? Perhaps, but so is a stack of pallets and other miscellaneous dunnage. This is the eighties, remember? A special time in musical history where even the most ridiculous of ideas can still be awesome.

This awesome* woman glides by our heroes; five middle-aged men poised at the ready just in front of a large sign bearing the words "Street Wharf." Thankful that the sign does not say "Skeet Wharf," we continue; dragged on by the indomitable pull of a visual shipwreck.

Keyboard guy Jonathan Cain and front man Steve Perry appear momentarily to demonstrate the agony and ferocity of a tiger attack in the timeless art of interpretive dance. At least, I hope that's what they're doing. What is Cain supposed to be playing here, the Godzilla?

Brrr, it's windy at sea and, clearly, at port as well. A sleeveless Perry fights the chill to deliver his message of soul-shattering love. It's funny to think both he and I are cringing at the same time, yet for completely different reasons, of course. Regardless, I welcome this cringe with open arms *tm. Men on pallets, aggressive closeups and a gravity-defying keyboard combine in the awe-inspiring clip-tastrophe accompanying the song's powerful chorus.

Still cold, Journey's dramatic front man continues his ode to the drama of love - wobbling unstably as a single spindly leg keeps him upright against a wall. His fury is palpable.

In an unexpected fit of love-rage, he stumbles forth from the tin wall to grasp furtively, yet futilely at the camera; a priceless eighties moment to remember. Second, perhaps, only to the mouth closeup following soon thereafter. Still stumbling, Perry backs his way through a maze of pallets. If ever there were a metaphor for the confusion of love, this would be it.

The woman from before, object of, erm, someone's desires, stares blankly into an amber sunset as two band members take turns screaming in her face. When Perry jumps (literally) into the frame, she (understandably) walks away - prompting the appearance of an unexpected treat...

Like a row of healthy cabbages, the other bandmates' talking heads chime in to the chorus - lending an air of seriousness to the scene that the woman's head exacerbates. The camera betrays us helpless viewers yet again as it pans across the bandmates' uncomfortably embarrassing musical lineup.

The balding jazz drummer plays tankards instead of, say, his drums, for reasons untold and the bass guy slaps his way up to us, gnawing at his own mustache in a meth-induced fit.

Sensing it's his time to shine, keyboard guy noticeably injures himself on the unforgiving glass of the passing camera and finally, lead guitar man lands a dismount from the vehicle he was on just in time to grace this disastrous video with a sick solo.

Then, it all goes off the rails - jumping infinite sharks in a pastel heaven.

Our precious gaggle of heroes brave a whole new frame-rate - going slow-mo in an almost unbelievable moment of labored epicness. Thankfully, the unbearable greatness that is this moment passes quickly enough to save us the embarrassment of wetting ourselves.

When the chorus returns, we find the five musketeers back atop their pallet throne, in front of a sign that clearly indicates 600-foot wide, American-made mattresses are being created just behind the tin wall.

Two of the talking heads face each other with the woman in between them. Are they implying something here? If so, the symbology in this video might be deeper than I thought. The video's final scenes are sensual in their symbolism; climax in its purest form.

It ends with the same woman sleeping in an 18th century under-funded-hospital bed under a blood-red blanket. Perry must have outdone himself.

Thus, it seems the horrors beheld by those of us brave enough to make it through this video are revealed to be little more than the insane creations of her sick, sleeping mind.

A fitting end? I'm not sure, nor will I ever be.

Check it out for yourself in all its unbridled glory and let us know what you think on Twitter (@odd_nugget). Oh, and stay odd! 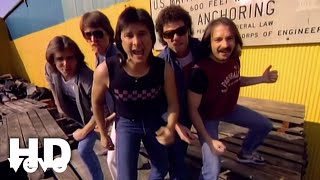