If Pokemon is an RPG and Red Dead Redemption is also an RPG...

Will there ever be a crossover? Gunslinging Pokemon trainers need to happen.

Check out all of these awesome rpg games by indie game studios and indie game developers. There are some real gems in the mix!

AM, City Center: the sky turns red before a massive explosion demolishes half of downtown.

Entire city blocks are decimated, and thousands of lives are wiped away without a trace.

All that remains is a single school building at the center of Ground Zero.

Return any evidence of terrorism or blasphemous activity.

For the Glory and the Power; Now and Forever. Demo version only contains the customization and studio features. Gacha units, battle monsters, play mini games, and more in the full version of Gacha Club. Please note you can not transfer accounts between the Windows and Android version, and online importexport is unavailable.)

What club will you join? Get the party started and create your own anime styled characters and dress them up in your favorite fashion outfits! Choose from thousands of dresses, shirts, hairstyles, weapons, and much more! After designing your characters, enter the Studio and create any scene you can imagine! Add pets, objects, and choose your favorite background! Customization is free!

CREATE YOUR OWN CHARACTERS

Change the colors for almost all of your items!

Adjust your haireyesitems to fit your characters!

Choose and customize hundreds of pets and objects!

Set custom profiles for all your characters!

Import and Export your friends characters!

Add up to characters anywhere on the screen!

Add your favorite pets and objects to the scene, too!

Choose from a wide variety of backgrounds and foregrounds!

Make your characters talk to each other with custom text boxes, pets too!

Save and Load up to scenes!

Use face presets to quickly change your face.

Thank you for playing Gacha Club!

Developed by RetroLab and published by Kagura Games

Yokoshima is an unsuccessful magazine editor who is in love with the raven-haired beauty of the same company, Hazuki Ichinose.

He's been trying to work up the courage to ask her on a date, but hasnt been able to go through with it.

However, it turns out that Hazuki is going to transfer overseas!

If he's ever going to have a chance, he needs to follow through before that happens! This is a horror game and may not be suitable for all audiences. Content warnings below.

Ryo, we've discussed this before, haven't we?You don't have a mom. I made you from straw, magic, and a lock of my hair."

Crowscare is a short horror game, RPG game,and a love letter to the autumn season.The game follows a young boy named Ryo, excited for the upcoming Harvest Festival in his hometown. Wouldn't you know? This is going to be his first one! He was never able to go to one before, as it always started past his curfew...but soon he'll see why he was never allowed out at night.The game takes about - hours to complete. There are two bad endings, and one goodtrue ending.Content warnings:Blood GoreImplied Child AbuseExtreme Violence Towards Child CharactersImplied Potential Child DeathMAC USERS: This game may not work on all Macs.If it does work on your Mac--When opening the game, do NOT click on the "Game" application. Instead, follow these steps:Go into the folder "Crowscare".Go into the folder "Game.app"Go into the folder "Contents"Go into the folder "MacOS"Open the file labeled "nwjs"Opening the game this way will allow you to safely use the menu and cancel commands. Opening the game from the application labeled "Game" will make it so that you cannot exit out of a menu that's been opened.Check me out on patreon to keep supporting my work!:https:www.instagram.comarcadekitten?hlen 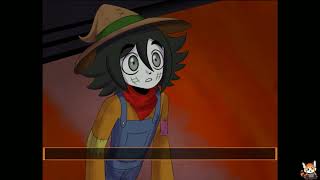