The barter skill in a lot of RPG games probably just turns your character into an extreme couponer..

There are more rpg games now than ever before! If you're looking to score a great game, look no further than these picks...

In the real world, frustrated you accidentally receive a call that is about to change your destiny. You follow the guidance to a traditional mysterious southwest town.

The optimistic and cheerful leopard Maodan always look lost, and the serious and silent bull Hongye always takes revenge on you,

In your dream, there is always a mysterious tile cat.

On the eve of the lunar eclipse, the three will gradually work with you to reveal the appearance of a romantic past.

And the feelings between you and them seem to have undergone subtle changes in the roaring of the bamboo forest.

According to our rules, there was a huge fire that night. This is the moon I made myself."

This is a visual novel game with the theme of furry characters and homosexual love. You will play a human character who is about to become an furry in the game, break into a small town in Southwest China by mistake, and get involved in the local wonderful past.

The game system provides archiving and file reading functions. You can make different choices and trigger different plots during the game.

The Incomplete Lunar" is the first chapter of this series. As the plot progresses, you will have a first understanding of the main characters of the game.

The game supports simplified Chinese and English. It is a good opportunity to learn a new language.

In the specific scenes of the game, there are slight pornographic nudity and slight alcohol consumption.

Check Out All of These New Indie RPG Games - January 2022

Welcome to Decks and Daggers! ADeck-Building RPG Card Game where you venture down into the dungeons to slay monsters and collect treasure!

Hrothgar the Barbarian is down on his luck until he meets a young scholar named Salazar. Together they journey to dark places to slay monsters and find treasure! But a dark threat looms on the horizon.

In this world of myth and legend,Youll meetinteresting characters such as Angvar the Skeleton King, Myrtha the Bog Witch,Equinox the Wizard, and Moloch the Rat Demon.

Through dialogue options, you can discover their story and roleplay as the kind of hero that you would like to be.

After every quest, you canvisit the tavern, whereyou can buy new cards from ashady merchant (no in-app purchases).Optimizing your deck greatly increases the chances that you'll survive in the dungeons.Decks and Daggers is available as a FREE DEMO version and a PREMIUM version.The Premium version contains:The entire (Barbarian) storyUnlocks all barbarian cardsAll locations on the world map Different endingsBossesAchievementsTo install the game:Download the zip fileUnzip the fileLaunch "Decks and Daggers.exe"Have fun playing!Mikel Fick - Osarion 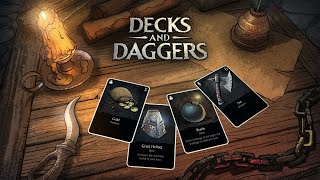 Stand Of Arms Is a first-person shooter that combines classic shooter and low-poly style elements. The game can choose single combat, team combat, campaign and other modes, you need to have excellent marksmanship and skills to win. If you've played 'Ravenfield', don't miss it.

There may be hidden enemies in every corner of the map. Find them and kill them. Be the first to complete the number of kills to win

There is at least one faction in the map besides you. Find and kill them, and be the first to complete the number of kills to win

There are multiple missions in the game, complete according to the requirements can win Level up your dice, find powerful equipment for them and try to get to the end of the dungeon!If you lose a fight you'll have to start again, so be careful : )

A bunch of achievements and modes

Code design by me

Thriller of Pansi cave" is a horror adventure game based on journey to the West: Pansi cave and combined with modern urban legends. Different from the traditional horror game, the horror degree of the game can vary from person to person, absolutely suitable for young and old. The two heroines of the game are pure and hot. You will play games with them in the mysterious underground world, make your choices and experience different endings.

I met her at a college competition. I was born poor and looked ordinary. She was of noble birth, white and beautiful. All the boys in the game were excited about it, and I was no exception. I thought there would be no intersection between us, but I didn't expect an accidental contact. We talked happily. After we got home, we still chatted online. We usually didn't know what to say after a few words with the girl. I talked with her until two or three o'clock in the middle of the night every night. On weekends, my sister directly asked me to go to her house in the evening. Although a little timid, I still summoned up the courage to rush to her house

The game contains multiple endings. You don't need to make a deliberate choice. You just need to follow your heart to play the game, and you can get your own ending.

We use the latest character rendering and motion capture technology to create the most realistic real-time rendered characters. At present, we are still testing and optimizing, and the effect you see now is still not the final effect.

Different from the narrow space of the traditional decryption game, we have created a huge world in the game. In addition to our daily apartments, luxury villas. We also provide a huge underground world, including intricate caves and underground palaces, which contains a large number of scenes of ancient legends.

We have conducted a lot of testing and Optimization for different game difficulties, so that hard core players can experience challenging decryption and battle, and players who like plot and tour can feel at ease to experience plot and tour the mysterious underground world.

Salty for young and old

If you are afraid to play horror games, we have prepared some props that will not affect the game content but can give you courage. You can choose to take him with you so that you can play the game happily.

This is a fantasy adventure story. After the plane crash, she entered an unknown world, which was full of dangers, but she had to explore and fight in order to return home.

For different prey, different weapons need to be used to produce more damage

Each type of bow has different range attack power and attributes, and with different arrows, it can hit long-distance targets more effectively.

Chiaya Ban years .mChiaya is one thousand students of Chiba University, though a pretty girl, but very fond of sports, is the power to send players in the archery department, the father used to say if you are a son just fine.

Yasumi " is a technical house. He works in the company of "Chiaya" father. Because he loves food and is not good at sports, he finally became a fat man. Although he doesn't run fast, he doesn't know how to fight. His science and technology are first class.

You will first get a very initial bow with a relatively short range and weak attack power. You can obtain some needed items by hunting and go to the camp for research. His attack power and range will be enhanced. There are other weapons in the valley. , appear randomly, including enemies, you can explore the valley and get more powerful weapons. When you are weak, it is recommended to look for rabbits in the valley.

When you complete some special tasks, or reach the designated waypoint (eye icon), the teleporter will be activated, and you can reach where you want to go faster through the teleporter.

Obtaining the bow: There are several boxes in the camp, the passwords of those boxes are scattered in the valley, you can go to the valley to find the password, and after obtaining the password, you can open the box to obtain the weapon, and while obtaining the weapon, you can research the Corresponding accessories enhance power and range. The longer the range, the easier it is to see distant enemies. Attacking enemies should attack their heads more, which will kill them faster.

This version is a beta version and is in preparation for subsequent upgrades. Hello and welcome to Indiepocalypse!

Indiepocalypse is a curated monthly collection looking to highlight the very best of the DIY indie game scene.

Each month will feature games by different developers, including a newly commissioned game exclusive to the bundle-zine. The games cover a wide variety of styles, genres, and themes as they fight against any definition of "indie game" as a genre.

Also, and this part is very important to me and should truly be taken as given, each contributor is paidand developers are paid royalties on all future sales.

A Wretched Alone hack for - players about debuts, proms, balls, and other nights of celebration. Can you survive your best worst night ever?

In ARCHIVER wander through a library made out of dioramas, dreaming of a different world by Kai Werder.Think about the world, why it is that way, and maybe you find ideas for a better future with ARCHIVER

Lonely Kids Around the Cul-de-sac(WINMAC) byWenderly GamesLonely Kids Around the Cul-de-sac is a short visual novel where you play as a kid trick-or-treating with his best friend a Halloween night.Gameplay consists of selecting which houses to go to, reading dialogue and making some choices along the way. All of this with your mouse.Headphones are strongly recommended.The Golden Tower (WIN) byFarfama, Robert Olazo𝔗𝔥𝔢 𝔠𝔬𝔰𝔪𝔦𝔠 𝔞𝔪𝔲𝔩𝔢𝔱 𝔥𝔞𝔰 𝔯𝔦𝔰𝔢𝔫ℭ𝔩𝔦𝔪𝔟 𝔱𝔥𝔢 𝔰𝔞𝔠𝔯𝔢𝔡 𝔰𝔱𝔢𝔭𝔰𝔒𝔲𝔯 𝔪𝔬𝔫𝔬𝔩𝔦𝔱𝔥𝔦𝔠 𝔯𝔦𝔱𝔲𝔞𝔩 𝔞𝔴𝔞𝔦𝔱𝔰Kill Crow, Ratstronaut (WINBrowser) byCharly Taylor, Kirby Taylor, Anders TaylorKill Crow is a hyper-sensory overload about killing an evil crow. Ratstronaut is a chill game about a rat exploring a haunted city in space.Project Anomaly: Urban Supernatural Investigator DEMO (WIN) byAdlan Ramly (Dark Science)Project Anomaly: Urban Supernatural Investigator: A .D first-person mystery game where you solve cases by taking pictures and understanding cryptids, folklore, mythological creatures from different cultures in an open world environmentMars Underground (WIN) byMatt SandersonIt's your first day at a new school. Every day is. Every night the world ends. Mars Underground is an apocalyptic adventure game where you relive the same day over and over.Shadows and Dust (WIN) by Matt SandersonSome choices cant be taken back. Shadows and Dust is a narrative game about regret. A deeply personal experience based on the authors own nightmares.Rheum (WIN) byAdrian RiedmanTravel through a fleshy expanse as an eyeball, collecting rheum (eyeball crusties) and fighting off infections, on your journey to escape this ...... vessel.NEWLY COMMISSIONEDFOR INDIEPOCALYPSEth Time's The Charm (WIN) byNessa Cannonth Time's The Charm is a short, branching IF horror game about moving (again). You seem to have a knack for moving into haunted houses and apartments - in fact, every place you've lived in the last year was haunted. You're hoping this new apartment will be different.BONUSElectric Zine Maker(WINMAC) byalienmelonLauncher Courtesy ofMM Bundle LauncherIndiepocalypse zine contentsCOMICSFairfolkby Sam PenderFEATURESCassidy's Bad Game Corner: Friday the thbyCassidyParts - of Games About Romance by AndrewInterested in the Indiepocalypse being delivered straight to you every month? Sign up for thePATREON.If you are interested in contributing to Indiepocalypse check out the submission page:SUBMIT YOUR GAME TO THE INDIEPOCALYPSETUNE INTO INDIEPOCALYPSE RADIO, SATURDAYS pm ESTFOLLOW INDIEPOCALYPSE ON TWITTERCOMIC ARTISTS AND OTHER ZINE CONTRIBUTORSAPPLY HERESIGN UP FOR THE NEWSLETTER(and get free copies of the PDFs!)THE FULL INDIEPOCALYPSE CATALOGDISCORDADVERTISE WITH US

Read XOV Comes At Us With "ATARAX" next.