Having a bad memory could be great for replayability of puzzle games like Portal.

Take a load off and enjoy a few of the epic indie puzzle games brought together below. They're bound to be fun!

>>What exactly is SlatiM?>>So long as there is Mercy is a Point-and-Click Puzzle Adventure in which the player has to lead Spe, the games protagonist, through an eerie dollhouse in an effort to find her little brother. On her way, Spe will encounter the ghost-children, who are also trapped, and can use their different abilities to solve the environmental puzzles in order to escape the house.>>What happened before?>>After their mothers death, Spe and her little brother Mercy stay with their father, who eventually marries an other woman. The two children face rejection from the new woman in the house, even when the father becomes seriously ill. After he dies, the will is read out, in which he bequeaths the entire familys property to his children. The stepmother is so angry with this decision that she locks Spe and her brother up in a dollhouse, where the siblings are separated. In search of her brother, Spe finds out the truth about the stepmother: she is a witch and swindler, who poisons her partners to receive the inheritance.>>Lets dive right into it!>>In order for Spe to get back to her little brother, she has to find the way through a number of mysterious rooms, which are guarded or locked by tricky mechanisms. On the journey through the maze, Spe meets the ghostchildren who can help her solve the puzzles by using their unique skills. One of them is Lucien. His ability is to spawn fire, which will help Spe to light the candles and fill the cold rooms with warm candlelight. Once she encountered a ghost child, she can pick it up and carry it with her. Every time Spe faces a challenge, the ghostchildren will bear a hand with their special abilities. Together with Lucien and the other ghost-children Spe encounters on her journey, she finds a way through the spooky rooms to hopefully be reunited with her brother again. Give These New Indie Puzzle Games a Go - Get Most of Them on Steam! - February 2022 Made by Untold Tales

What Lies in the Multiverse Prologue is the first chapter of one truly crazy adventure. Intended as an introduction to the world of What Lies in the Multiverse, this prologue will introduce you to the games dimension shifting mechanics, eccentric main characters, and the opening chapter of a story that's filled with laughs, gags, and a bit of the macabre.>>This prologue is approximately 1 hour of playing time.>>What Lies in the Multiverse is a story-driven, puzzle platform adventure that one could call a dramatic comedy. Filled to the brim with hilarious, cartoonish hijinks, the narrative also presents the player with mature and deep themes like death, envy, and obsession.>>Things inevitably go bat$#!# crazy very fast in the Multiverse when you discover the ability to travel between parallel worlds. These worlds are alternate versions of each level and differ in aesthetic, theme, and physicality. Switching between them allows you to solve logical and spatial challenges and to progress the story.>>Seamless Transformations>>Would you like to change the game world on the fly? Now you can! Can't reach a ledge? Bam! Switch worlds mid-air. Afraid of sliding around in an icy environment? Alternate to another universe for firmer ground! Just be careful when messing with gravity...>>Diverse World>>Embark on a journey across a variety of gorgeous pixel-art worlds, each offering something unique. Explore temples, towns, harbors, the wilderness and more as you race to unlock the secrets of the Multiverse.>>Colorful Cast of Characters>>Meet a bunch of quirky but compelling characters such as Everett, your eventual genius companion. Picture a sarcastic, eccentric Albert Einstein. Then theres EZ, a mysterious figure everyone fondly remembers but can't describe. Or ZENITH, a group of enigmatic and shadowy figures always breathing down your neck.>>A Deeper Story>>While staying true to its light-hearted nature, the story's poignancy builds as you progress. A rollercoaster of laughter, joy, and sorrow awaits. 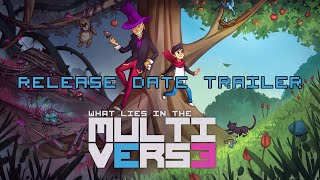 >>>>Otteretto is a puzzle game about otters and palindromes.>>New Puzzle Concept>>This isn't another Match-3 game; it's a whole new idea to wrap your head around! How long of a palindrome can you make?>>5 Endlessly-Replayable Game Modes>>Classic: Try to reach each level's score goal in the addictive original mode.>>The Daily Stack: Join a global competition every day! How many points can you get from the same set of squares as everyone else?>>Puzzle: Use logical reasoning to figure out how to turn a set of squares into a single, massive palindrome!>>Containment: With more squares being added every move, how long can you keep the container from overflowing?>>Walls: In this challenging variant, you'll need to get creative to work around each level's impassable walls.>>Compete With The World>>See how you stack up with online, cross-platform leaderboards. >>There are a lot of treasures in the deepest of the relic, but only adventurers with wisdom and courage have the opportunity to approach them.>>You will push the rocks, activate devices and teleport circles to create the way to the next stage,>>overcome the poisonous spores, flames and water,>>travel through different terrains, layer by layer towards the treasure.>>The gameplay is simple and not having much stages, but they are difficult.>>Only recommended to people who are smart, with good logical, love or are good at solving puzzles.>>It is said that more than half of the adventurers are given up before they can pass even the 7th level...>>Are you better than them?>>The game contains:>>10 kinds of devices, monsters or traps>> 3 chapters with different terrains>>25 levels>>2.5 25 hrs game time>>Simple operation>>Lots of extremely difficult puzzles>>Not too many tips >>Hidden Dream is a 3D adventure game about puzzle, exploration and collection. In this game, players are supposed to participate in the story about how did Princess Wencheng complete her journey to Tibet that for getting marry with Srongtsen Gampo in Princess Wenchengs fantasy world.>>There is a number of puzzle and a lot of collecting element in this game. The collections include traditional history culture, basic necessities of life, local conditions and customs and natural scenery of China in Tang Dynasty.Players will experience diverting playing method and mental adventure of Chinese traditional culture in this wonderful journey.>>Hidden Dream is a journey that full of mysteries and loneliness, but without any danger, frustrate or death element. Players will play the part of Princess Wencheng and experience her change gradually in her illusion.>>Players will explore a new world by learning a variety of skills step by step, meanwhile, figure out Princess Wenchengs puzzles. Players will grow with Princess Wencheng together while proceed along this journey.>>Players will hear original music of Chinese customs, experience visual impact of Chinese historical and cultural scenes that appeared by exquisite painting style, enjoy the fun of solving puzzles, feel attractive Chinese traditional history culture through this fragmentary story.>>Please try the Demo Hidden DreamPrelude

>>Calm and relaxing puzzle game made with love. Easy to play, Just pick your cute friends up and put them on the grid.>>No stress, no time pressure.>>Over 50 different shapes. And 100 levels of pure enjoyment.>>FREE ADDONS AND UPDATES!>>The first free addon is scheduled for March 8 this year. New Shapes and new levels!>>KEY FEATURES>>Free Addons and updates for life!>>Over 50 animated cute shapes crafted with love>>100 handcrafted levels>>Relaxing music>>Collection and Achievements>>Easy control as expected, right and left buttons>>Skippable levels. Come back any time you want to complete your levels>> Made by Golden Coin Games

If Fusion Were That Easy is a classic point-and-click adventure.>>You take on the role of the young physicist Daniel, who is working on a reactor for cold fusion. As the project spiraled out of control, a mysterious association emerges that somehow appears to be involved. When Daniel meets crazy old George, the chaos seems perfect.>>A mixture of 2D pixel art and 3D characters and elements creates a unique visual world of experience that invites you to explore and discover. Games like "The Secret of Monkey Island" or the Deponia series, but also Professor Layton, have inspired this game. With an exciting story, lots of humor, and challenging puzzles, If Fusion Were That Easy offers hours of fun entertainment.>>In summary, If Fusion Were That Easy can be described as a modern retro point-and-click adventure that you can never have enough of. 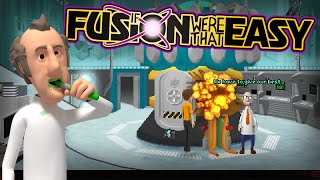 Read SINK Wraps Music With Emotion in "tangled" next.