Toads from the Mario games are just cute, harmless myconids.

You can play any of the cute fighting games that follow and have loads of fun. So, go on!

Developed by Emilie COYO and published by Blowfish Studios

Do you stand a chance against the wicked Queen Evangelyn and her army?

You're the last hope to prevent her world domination!

Play as either Tanya or Olga, two girls who have the power to stop the Beljantaur Kingdoms growing army and take down the evil Queen.

Take on a range of different bosses in either single-player or co-op across a variety of stunning chibi pixel art style backdrops as you explore the Beljantaur Kingdom.

Your agility is the key to your survival on the battlefield and your strength is what will prevent the Queen's reign of terror from taking over the world...

Do you stand a chance against her Majesty? Survive until dawn and resist through 10 enemy waves!

Onion-Sanand Froggy are lost in the wood and the night is falling.

While a hero is taking a rest, the other one has to protect the fire from monsters.

Switch between heroes, level up, upgrade your skills, cook and play music to survive all night long!

Use arrow to move

This game was inspired by the arts ofDaniel Gil, a video game artist from SpainA game made in 1 week for theA Game By Its Cover 2021 Game Jam.It was a lot of fun to craft this game, hope you'll like it!Music, SFX, 3D models and animation : CyrolisCode, FX, UI, 2D sprites : Blukulele

Developed by Mane6, Inc. and published by Modus Games

Enhanced Super Attack - Spend an additional bar of meter during your super for a bonus utility effect.

Juggle Decay - An infinite-prevention system that increases a character's gravity the longer they stay in a combo, managing combo length without imposing hard limits.

Dynamic Music System - Rockin character themes adapt in the heat of the battle to make every fight feel like a clash of champions.

Rollback Netcode - Battle across the globe with little to no input delay with the power of GGPO.

Local Versus and Online Matchmaking - Play at home or fight worthy opponents on-demand.

Tutorial and Training Modes - Learn the ropes with guided tutorials, or practice on your own with a fully-featured, data-rich training room.

Sharable Combo Trials - Test your skills with premade combo trials or create your own challenges and share with friends!

Replay System - Record your matches then review every detail frame-by-frame!

Salt Mines - Hidden within each Pixel Lobby, a contest that pits players against waves of NPC predators and each other, combining dungeon crawl with fighting game.

Story Mode - An episodic adventure filled with exploration, combat challenges, minigames, and boss fights! Each chapter follows one character's personal quest to recover a magical, legendary key that will save the world from the return of vicious predators, banished in an age past. Chapter 1 (starring Arizona) is available now, with subsequent chapters to be released in the months following, free of charge. Buddy Bash is a physics-based multiplayer 2D platformer fighting game that combines parkour moves and firearms into a cute, yet brutal, cocktail of friendly competitive fun!PHYSICS!Every fight plays differently while you use momentum to inflict maximum damage on your opponent(s)DESTRUCTION!Bash your opponent into a wall or into the ground hard enough and you'll see them fly through it. Or just use a bazooka.PARKOUR!Developed by parkour enthusiasts, the moves of your fighter are inspired by real life parkour movementNEON!Enjoy the visual spectacle of your martial artists in the glow of 80s(tm) inspired neon lights2 TO 4 PLAYERS!Gather a group of friends on a coach to see who bashes their buddies the best!ONLINE!Play with your online friends using Steam Remote Play! Have you everseen cleaning robots fighting?? RoomBattle took that crazy idea and made it intoa multiplayer game!

RoomBattle is a "competitive" party game up to 6 players. You can fight in two game modes that will make sparks fly with your friends.Customize your robot as you want with different sharping weapons and cutie skins.Be prepared tofight in your living room andgood look running away from this violent cleaning robots!

RoomBattle is a university project made by Dust Games, whose members are: 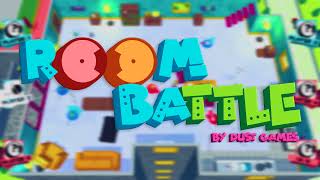 Developed by 2nd Studio and published by Fig Publishing Inc.

KnightOut is a party brawler for 1-4 players!Play with or against your friends in a frantic battle.Half the battle is won by building an epic castle with deadly weapons and traps.Charge into sword duels or keep your distance with long range weapons.Battle:Each game starts with both teams building a castle outfitted with cannons. Then, all hell breaks loose! Cannon balls fly, stone walls crumble, and your knight takes to the turf, slashing his sword. Once youve destroyed your opponents base and K.O. the king or queen inside, you win the round. You need three K.O.s to win the match. After each round you can rebuild your castle.Story:Play through several levels and defeat enemies as you expand your arsenal. This game mode is singleplayer or co-op. You will start your adventure in Braal Kingdom and travel through other kingdoms as you gain cupcakes after each level to unlock new worlds. It features a cute story with immersive cinematic cutscenes.Arcade:Defend your castle against waves of enemies singleplayer or in co-op with your best friends. Compare how you are doing with the rest of the world on our glorious leaderboards. The enemies will drop gold as you defeat them. Gold can be used to upgrade your castle after each wave of attacks.2 to 4 player battle - Play against or with your friends in team battle in local multiplayerBuild a massive castle - Use your creativity to build your own castleFight in melee combat - Its easy to learn yet hard to master4 different battlegroundsRaise your arsenal - Build different weapons and defenses with 16 items to choose from.Original soundtrack by Mike Raznick (Rachet Clank PS4, Oddworld: Abes Oddyess New N Tasty)A stylized vibrant art styleTons of flashy unlocks You can play with your friends online via Steams Remote Play TogetherNote from the developers:KnightOut has been in development for some time, and we have put a lot of sweat and love into the game. We are happy to release it on Steam and hope you will enjoy playing it. Its been a process with a lot of feedback from the players, and we hope you will continue to help us shape and improve the game. Developed by BigYu and published by BD Games

Have you got what it takes to be a Wanba Warrior? Step into the absurd world of calligraphy combat and prepare to lay the smackdown upon all who dare to oppose you, dishing out damage with your chosen ink brush of brutality!

Utilizing hilarious swing-based fighting mechanics, in addition to a range of insane supernatural abilities, get ready to push your skills (and friendships!) to the limit as you fight to become the best there ever was.

Set in the long-lost ancient past (or perhaps the far-flung distant future) warriors from across time and space have assembled to settle their differences. A battle for the ages is about to commence. A battle of Wanba Warriors! Read Tommy Down Sees Right Through the "Superficial" in Chill New Track next.