It's tragic that Tetris, one of the most iconic casual games, can't really be played properly on touch-screen mobile devices..

We've put together a list of the latest indie casual games below. If you want to know what you should plug in next, keep reading! >>The world is ending. But it's not as scary as you think. Well, maybe it is.>>We all make choices in life. Except most of those choices are not within the context of the apocalypse. Meet the staff of the Department of Pre-Apocalypse and Post-Apocalyptic Affairs: Arthur, Iris, Oliver, two of the Four Horsemen of the Apocalypse, and others. Their job is to make sure the transition from one way of life to another is as smooth as possible... you know, as smooth as an apocalypse can be. Their latest assignment is a doozy - a new Great Flood that is going to wipe the planet clean. A daunting task for anyone, and these anyones just happen to have a metric boatload of emotional baggage. Will they get their collective stuff together in time to pull of a perfect end-of-the-world?>>That's up to you.>>You get to make the decisions that will shape our heroes. You get to choose how they will react to the moments that will stay with them forever. Taking each of their lives into your hands, you get to make their choices for them, for better or for worse. It's part adventure game, part visual novel.>>How will you end the world?>>Features>>Take control of every main character as you choose how they respond to situations.>>8 different categories in which to shape the story.

Made by Ryan Nein

Yamasen-Chan's Hermit Home Designer is a hikikomori themed visual novel and designing game.Yamasen-Chan is a hikikomori who lives in isolation and never leaves her home. She really wants her home to look great!>>Will you help her make a stylish and comfy home?>>Features:>>6 unique homes to design>>Complete Visual Novel Narrative>>Over 100 items to design with>>Original Soundtrack>>Game design, art, and musicby Ryan Nein:>>Instagram - Twitter - YouTube - Soundtrack>>Post your designs in the comments! 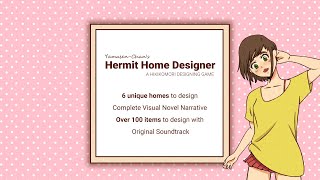 >>Stuck stranded alone in another dimension your only goal is to get back to your family, your life. Explore the C.U.B.E to find any information about where you actually are and how to get back, just remember to not go insane trying!>>Kilroy Was Here is an Interactive Fiction game where as the player you must traverse the 7 environments in search for their unqiue interaction points to try to gain a better understanding of the place you've ended up in and to try and find a way home.>>The More You Look The More You See.>>Features>>Unique Scenery: 7 Completely unique environments for you to explore.>>Simple Controls: Get straight into the game with basic and common controls.>>Steam Achievements: Show off to all your friends what you did in-game. Developed by Red Panda and published by IAD 3D

>>Your country is counting on you ! Play as engineer pandas in local coop, you and three of your friends to defend the Great Wall of China from the predators that attempts to go over it !>>You have to cooperate efficiently to make diverse firework ammo, and use them with your weapons to defend your position. Gather your enemies with the fan to shoot them all at once, move the lantern to get a view on the wall, reload the turret for your last chance firework, and much more !>>Try and obtain the highest score on levels always more crazy, with new traps and mechanics, to strengthen your bond with your friends... Or not.>>OverWall is a game created for a 2nd year's school project at Interactive Art Design, Montpellier. The goal was to create a coop game inspired by Overcooked. The project has been made with the help of the students of Audioworkshop school, who made the sound design of the game. Security First>>You are God's most trusted bouncer, and he's throwing a party in heaven. Only allow saints into the party, and kick sinners straight to hell. God's law keeps changing, so pay attention!>>Controls>>[Space] - Kick a soul to hell when it reaches near you>>Credits>>Alon Sharabi: Art>>Benny Gafanovich: Programming>>Dana Brenner: Iconography>>Idan Rooze: Tech Art>>Shay Zegraba: Music SFX>>Special thanks to Yehuda Israeli>>Created during Global Game Jam 2022

>>A side-scrolling shoot'em up game that cute Marimo Moss Balls fight against ferocious alien species!>>Overview>>A 2.5D shooter with old-fashioned side-scrolling and a way to attack enemies in the background.Fight with lock-on shots that can track up to 6 enemies appearing from the back of the screen at the same time, and forward charge shots that can penetrate enemies and enemy bullets.>>Defeating many enemies with one attack will increase the score you get, and the final score will change greatly depending on the order in which you defeat the enemies.>>Please check the in-game tutorial for details on how to play.>>Game features>>2.5D side scroller>>Simple operability with only movement and two types of buttons>>5 stages 1 hidden stage>>Charge shot whose power and effect change depending on the charge time>>Lock-on shot that can attack multiple enemies appearing from the back of the screen at the same time>>Gimmick by physical behavior>>4 difficulty levels that can be selected according to your skill>>Tutorial for first-time users>>Two operation types and key config>>Graphic quality that can be changed according to PC specifications>>Orchestra sound that creates an atmosphere of crisis>>Bonus: A collection of data to learn about real alien species>>Story>>In 2222 AD, the world's ecosystem changed drastically due to the destruction and pollution of the natural environment on the ground.The impact of large-scale destruction has eroded the land, connected the sea to lakes and marshes, and threatened freshwater organisms.>>In addition, unknown mutations occur in aquatic organisms that have taken in "mysterious particulate matter" that has poured from the ground into the entire body of water.>>Lake Akan, the habitat of Marimo, was also invaded by various mutated alien species and preyed on native species one after another.>>Spherical marimo, once protected by humans, has been significantly reduced in number, leaving only one small colony now.>>The non-resisting Marimo seemed to be extinct without any help, but suddenly a mutant individual appeared in it.>>Mutant Marimo, which gained the ability to freely manipulate oxygen released by photosynthesis, succeeded in repelling alien species for the first time by that power.>>The few survivors of the spherical marimo have begun to roll to fight the imminent hordes of alien species.>>Disclaimer>>This game is fiction.The creatures that appear are modeled on real animals and plants, but there are expressions that differ from the actual ecology. >>PLEASE REMEMBER THAT THIS GAME IS IN BETA STAGE THERE WILL BE BUGS>>Army based war strategy shooter and multiplayer game.>>Militaristic Rain of Terror is a First-Person Multiplayer game>>where you fight for victory on different maps based on your war tactics.>>The game features new maps, weapons, skins, game modes,>>and delivers updated versions of the classic content. this game started off>>with a group of friends from which it has now evolved for everyone to play and have fun.>>>>MATURE CONTENT DESCRIPTION>>The developers describe the content like this:>>Includes violence and blood. Level up your dice, find powerful equipment for them and try to get to the end of the dungeon!If you lose a fight you'll have to start again, so be careful : )>>- Try the free demo>>- Simple turn-based combat>>- 3d dice physics>>- 60 hero classes>>- 36 monsters>>- 171 items>>- A bunch of achievements and modes>>- Online leaderboards>>Code design by me>>Pixel art bya3um>>Discord:more stuff coming