Fighting game combos are like songs you play on your controller.

Fighting games can offer up a lot of fun and these indie picks are pretty affordable too! See for yourself...

FIGHTING HEART is a 3D 1v1 fighting game, bringing the speed and precision of classic fighters into the third dimension.LIBERATING MOVEMENTMove freely in 8 directions. Jump, duck, dash and dodge your way to victory.COLORFUL CHARACTERSPlay as larger-than-life fighters, using less than realistic special moves and techniques.CUSTOMIZE YOUR BATTLESMutators let you shake up your gameplay. Add instant kill divekicks, air-dashes, dwarfism, and more.MASTER CHALLENGING TECHNIQUESMechanics such as Evasion Cancel let you spend meter to escape or extend combos with good timing, while 1-frame links and juggling open the door to devastating damage. The war against humanity have shifted in the favor the Machines. Play as the protagonist Rockie and use Electro-Magnetic combat to battle the Machine bosses.

For fans of Yakuza style combat and boss fights, this is the game for you!

Switch between four different fighting styles instantaneously during battle. Each style has it's own advantage and disadvantage in battle.

Each enemy opponent will have a unique fighting style ranging for Boxing, Martial Arts and Capoeira. FIGHT KNIGHT is a mix between a first person dungeon crawler and a high speed action game.Players spend their time ascending a massive Tower, learning the story of FIGHT KNIGHT and getting to know friend foe alike. Along the way they'll solve puzzles, collect artifacts and help FIGHT KNIGHT grow in power. Encounters take place in real time, through grid based melee combat.Wits and reflexes pave the way to victory. Will YOU master the Tower and those who wait within?

This is the DEMO for FIGHT KNIGHT, a game currently undergoing development. If you'd like to learn more or possibly support said development, please check out our new KICKSTARTER! :D

for bug reports or long-form feedback, you can feel free to email us at :fightknightfeedbackgmail.comyou can also reach us at:https:twitter.comSorcerobe 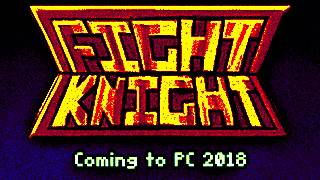 Go 1v1 against another player (or a CPU) in a fighting mode. With cars. I dunno either, I came up with it while in the shower.

Controls for both game modes are 8 directions and one button. Play one-handed, if you want! Keep your other hand for... holding orange juice! Yes! Darkness Battle is a slasher in which you have to fight with the warriors of darkness.You will have to pass interesting levels in various locations, making your way through crowds of enemies. You will also have to fight in the arena. For all this, you can use medieval weapons.Features:-Exciting levels-Beautiful effects-Easy control-Realistic battles-Realistic damage system The illegal hat in your possession has an unprecedented level of style which will inspire others to join your rebellion. Fight with sword, spear and shield to survive against those who would destroy you. As your power grows you must determine where your true ambitions lie.

The dueling system is easy to learn but hard to master. There is no need to memorize long combos. Instead the focus is on quick reflexes, timing and tactics. Beware feints, be strategic with your distance and don't run out of steam.

Bot combat modules restrict fighting to duels only. This means battles are conducted via 1v1 duels until one squad has been completely defeated. Strategically select your fighters and either simulate, spectate or take control of the duels yourself!

Discover and equip new bot parts and items to increase your attributes that best suit your fighting style.

As The Hat Wearer you will lead the Hat Rebellion. Do you seek to start a political revolution aiming for total hat freedom? Do you want to claim power for yourself? Or do you seek to discover the truth behind this world and the authoritarian Genu Corp?

If you run into frame rate issues please lower the graphics settings in the options menu.

The full game will have local multiplayer. However, the demo is single player only.

I will love to hear any feedback. 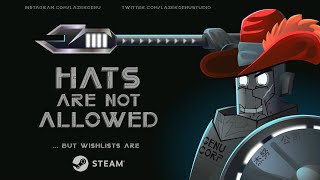