Epic fantasy video games like these are totally worth taking a closer look at... In the land of Zympaia The New Light you'll be directly exposed to the world, without having anything in your hand or in your pocket. You decide how situations will turn out for you. Different professions can change your life, so you should take everything into account.I'm keeping the game in a simple state at the moment which means less to build, less resources available to you, I'm looking forward to what your opinionsreviews are, if I see that you want more of this game give it a thumbs up.The game is a role-playing survival game with already a fantastic landscapes. Likewise, there are many options, such as crafting, fishing, inventory, quest and professions. The game is currently in alpha and quite a bit more content is still being planned.Darkness descended upon us. Dark creatures set fire to entire cities until nothing remained but ashes. Time passed, but the darkness endured and there are few survivors left. Now I am the one who must do something about it, for otherwise we are all lost.Campaign:Your only goal is to rebuild your late father's old farm and on top of that, survive as long as you can.Your adventure:As a farmer you won't get much recognition, try everything possible to achieve your goal. Make friends with the townspeople, work hard to achieve your dream. Fight the darkness to live a peaceful life again.Housing:At the beginning of your adventure, your sister bought you a small house from the mayor that once belonged to your father. Now you can settle down there. Make your own new furniture to make your home more beautiful. When you have enough gold, you can enlarge your house and develop it further. In the next stages of development you can change the walls and also the floor.Customization:In the game you'll be able to choose your gender and to make your character look good, you'll have the possibility to change the face andor the hair. Enter your birthday and choose a name for your heroine.Concept:It is planned to add new content to Land of Zympaia The New Light, e.g. events, new missions, more equipment items, but also to further improve the game world. The whole game is in real time, that means a change of day and night and the date is identical to the real time. What else will come, what is already or is still in planning, you can read on our homepage. If you like the game, you will get 56 new items, new vehicles, bigger Arial, more building elements, more resources, more monsters and much more.

Got Gamer's Block? Bust Open One of These New Indie Fantasy Games for a Change of Pace - February 2022 Made by Nifty Visuals

Keep the main characters alive through the story by improving their skills.Host social events to gain different factions approval. You can also go on campaigns to bring the ongoing war to an end.

This game is an indirect sequel to our Visual Novel"Royal Alchemist". The story takes place in the same world, but follows a different cast. Both games can be played separately from each other.

TheSval, pirates of the utmost north, are wreaking havoc all over the continent ofIgrith.

Vowing to bring an end to their endless plundering,three kingdoms send forth their royal heirs to the High Council, a powerful and influential faction of magicians, to plead for their help during this time of crisis.

The High Council oblige, creating theRoyal Order, and the heirs remain; however,political tensions are highas old grudges resurface between the three kingdoms. And, as the pirates continue to have their way,they are determinedly bound to reach their breaking point.

Play asAarya, the newest member of the High Council, and help manage the Royal Order.

Can you put an end to the Svals pillaging while keeping the kingdoms at peace? Or will you bring nothing but war upon them?

and many deaths! :D

Woodcutter Deluxe Edition is a classic platformer, tells the story of Woodcutter whose child was kidnapped. Embark on a magical adventure through the land of Aaran and help Woodcutter retrieve his firstborn.

There are 72 levels to complete, filled with coins and enemies (including 2 levels with bosses, 5 bonus levels and 1 level with mini game),

3 weapons to use (Boomerang, Bow, Explosing barrels) and your body to smash your enemies, Milo is a horror game where the player will find himself trapped in dungeons from which he will have to escape. And in crossing the various caves and catacombs, you will have to be careful not to run into one of the monsters that populate them, including skeletons, zombies and werewolves.

In the unfortunate hypothesis that one of them notices his presence, the only possibility to save himself will be ... run.

Set in a medieval fantasy world, the protagonist ... Milo embarks on a voyage by ship to bring a wedding gift to his friend, Baron Valek. Recently married to his beloved's sister. But when he reaches the port of the village of Valmore, which is near the castle, he is attacked and dragged into an underground prison. From here begins his adventure ... or perhaps it should be said ... his misadventure. After uncovering a regicidal prophecy, the old Mage must leverage the power of mindbody dualism to cross dimensions, posses the bodies of others and ultimately foil the assassination plot on the King to whom he serves.

Developed by Otis Miller and published by Fire Cycle Games

Defeat overwhelming odds. The enemy will be numerous and powerful, but not nearly as intelligent as you. Use that against them.

Every elemental interaction is considered. Lightning Stuns and spreads through Water. Water puts out Fire. Fire spreads through Oil. Oil is slippery.Each Unit gains Momentum each time they are moved. Use this to your advantage for a completely new tactical experience. Combine elements, knockback and Momentum exploits for extreme synergies.Every Card can be customized during a campaign using Mods. Mod your Rain spell with Electrified to turn it into a storm cloud. Mod your Fireball with some extra Damage and AOE to make it explosive.Unlock Insights between each campaign to customize your run with new Cards, Enemies, Weather Effects, Difficulty Modifiers and more. The Hierophant is a simple and traditional style top-down 2D turn-based RPG set in a linear open-world with many biomes and environments to explore!

All kinds inhabit these lands, like simple folk with the intention of good, some for the thirst for treasure, spellcasters, and the holy clerics all who walk just.

Though, not all is forever peaceful.

A shroud brings forth cattle slaughter, the waters turn to blood, and tragedy unfolds, awakening the prophecy.

CONTRACT DEMON is a visual novel created for NaNoRenO 2019. an angel summons a demon, and they end up... in love?!it takes 20-30 minutes to readthrough the story. there are no choices or alternate endings. 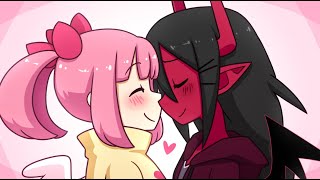