The Good, The Bad and the Very Bad

Real-Life Villains Are Not Cool

Finding out some douche like infamous Youtube villain Onision is a total pedo, narrowly dodging imprisonment, while looking like a real-life goblin, is an easy thing to ignore.

I mean, that Onision guy always sucked anyway. Who cares?

But, it hits quite a bit harder when someone you actually thought was a decent human being is outed as being anything but.

The Good, The Bad and the Very Bad A major part of his appeal was the semblance of a beating heart hidden behind the enigmatic avatar he was known by. Cry's videos were pleasant to watch because he seemed like a nice, albeit private, person.

Cryaotic's Undertale series on Youtube was my introduction to the game. It's also my favorite playthrough of a game on Youtube. Why did I enjoy it so much?

Well, he wasn't loud or obnoxious...

He mostly kept the cursing to a minimum...

He patiently read each character's dialogue with feeling and genuine interest...

But, most of all... He was kind to everyone in the game. He automatically chose to show kindness in each encounter; something that most would not have done. And, he took the time to really get to know the characters, almost as if they were real.

It was a heartwarming experience, paralleled only by the heartcrushing blow his sordid misdeeds dealt his fans some time later.

Cry, the real-life guy, is nothing like his Internet avatar's disembodied voice. All that kindness for characters didn't translate to kindness for kids and real people - quite the opposite. He's been abusing children for years. 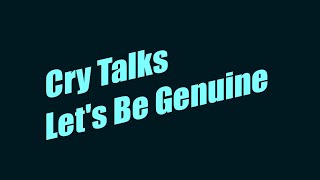 Real-Life Villains Are Not Cool Honestly, admitting to being some sort of furry-obsessed assassin with a heroin habit and a personal meth lab would pale in comparison to this guy's actual actions. For the unaware, Cryaotic, aka ChaoticMoki, "groomed" (conditioned) his underage fans over the years to fulfill his perverse fantasies with illicit sexting and video liaisons.

He made many of his followers aware of the situation when he tried to frontrun the fallout with a special Youtube video about "being genuine".

I saw the video, not knowing what he was referring to, and I didn't know what to think. The comments then proceded to blow my mind... I wouldn't go so far as to say I idolized Cryaotic (or anyone for that matter), but I respected his work and the persona he showcased in most of his videos.

Unfortunately, that carefully crafted persona - the chill voice, the positive outlook, the goofy jokes - was all just a ruse. A ruse he used to take advantage of children in the worst ways he could. I'm no philosophizerer, but I can't help trying to dredge something meaningful from this shipwreck of a revalation.

Idolatry is more than just some kind of sin, it's a way of overlooking an individual's humanity. It's seeing someone as what you want them to be, rather than what they really are.

I'll do my best not to do that. Ever.

The catastophic fall of Cryaotic is really just the fall of some guy online whose face you'll probably never see...

Unless it's in a mugshot.

Read about Trumpy and zomBiden next.