This week's New Sounds are brought to your ears by Mike Brunacini.

Mike Brunacini, a self-described songwriter first and musician second (Twitter: @BrunoSpumoni), composes songs in a number of styles - all touching and brilliantly written.

He also just so happens to have recorded and mixed Big Lunch's first album. Check out their interview HERE.

Although he does not tour at the moment, Mike ocassionally plays music locally in his hometown of Jamestown, NY and has recently put out an impressive album titled "Cherry Springs."

With influences ranging from Steven Page to Billy Joel, his style is distinctive and refined. An intentional "power-pop" sound characterizes the bulk of "Cherry Springs" as well - effectively luring listeners into enchanting stories and captivating narratives.

Each of the album's tracks have been crafted with care and the rhythmic changes as well as overall dynamics effectively capture one's attention.

As "Cherry Springs" was meant to be less of a concept album than his others, each song on the album serves as an isolated, stand-alone creation.

"Beginning," thus, is less of an opening to a continued story within the album and more of a launchpad for anyone new to Mike's music.

Straight-forward and balanced, "Beginning" is a solid song to consider at day's end (unironically of course).

I particularly loved the message in this track. What good is life if it's spent in fear of living? "Living Electronic Emotions" extends into the realm of progressive rock with its adventurous dropped beats and imaginative story-telling.

A fascinating tale of a sentient machine experiencing the complexities of life, this song is great fun to ponder.

"He feels the urge to cry but knows he couldn't if he tried."

I mentioned to Mike how much this track reminded me of Owl City. He'd never heard that comparison though.

Nostalgic in a magical way - leading listener's deep into an experience we've never actually had, this track is a beautiful account of a fairground's gradual shift from its glory days.

It's always odd visiting places we once knew well, only to find they've changed considerably.

This song deals with such experiences and does so with understated artistry. The eponymous track off Mike's album plays to the listener's sentiments expertly.

In this song, mike pines over a visit to Cherry Springs and a future yet unwritten.

The piano rises to the forefront in this one and carries the song down a thoughtful path.

Listen for yourself and find out where it leads. 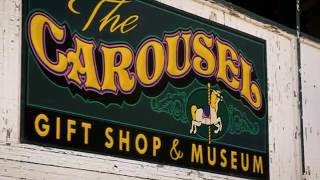 Read about Chameleonize's "Velcro Shoes" next.