Its all fun and games until someone gets hurt doesnt apply to fighting games.

Fighting games can be great fun to play. Take a look at these awesome picks and pick up your controller!

City of Rampage is a side-scrolling beat'em up game inspired by such SEGA Classics as "Streets of Rage" and "Comix Zone", with advanced fighting mechanics, with challenging tough enemies and even tougher bosses.

This journey won't be easy, but beautiful hand drawn visuals and dope soundtracks will make sure you will be coming back for more.

See you in City of Rampage! EGGNOGG is here!, with many cool new features...

Deeper, more nuanced swordplay. Trap and press your opponent's blade, push them off-balance and force them into a pit of spikes or stab them in the legs. Disarm them with a perfectly timed parry and thrust. Execute the FLECHE and run them through with a surprise attack.

Slide down the walls. You know you love it.

SKELETONS and BUGS (scorpions, not glitches) and stuff

Added two new maps, just in time for STABMAS. Have fun stabbing! And don't forget to stab this holiday.

EGGNOGG, a competitive arcade game of immortals sword-fighting to the death.Stab each other, hurl and ricochet your swords off of the walls and ceilings, engage in pugilism, jump over spike pits to make it past your eternal foe and reach the far end of the strange complex. Hurl yourself triumphantly, and finally, into the EGGNOGG.Includes procedurally generated bytebeat tunes that you can edit live, and also create additional songs.Created originally for the 2013 March TOJam as a re-imagining and parody of NIDHOGG (while awaiting the release of NIDHOGG).EGGNOGGEGGNOGG is awesome on custom arcade cabinets.EGGNOGG was a finalist at the 2014 Canadian Videogame Awards!YoutubersLet's Players: Feel free to record and do whatever you like with videos of EGGNOGGEGGNOGGEGGNOGG community on itch.io: at madgarden.net follow madgarden on Twitter 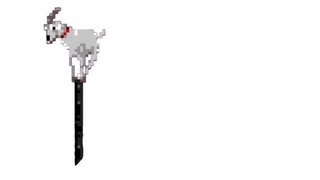 Defeat the Dragon Master.. and the rest

When a powerful, ruthless master emerges in the world of martial arts, it awakens many emotions. From the ambitious master looking for a challenge, to the wronged peasant sworn to revenge, to the jealous emperor who wants to be the sole ruler of the people, it brings out many people to fight each other and achieve their own goals.

Step into your own kung fu movie inspired by colourful characters inspired by Chinese and Hong Kong martial arts movies across the decades. Whether you fancy playing as an old wise master, or a young gifted female kung fu student, or a shaolin monk, bruce lee inspired character, samurai or a ninja there's bound to be someone for you...

When you learn how to adapt, you will be unstoppable... When you redirect your opponents energy: you force him to change. So in essence he defeats himself."

Block attacks with your hands or forearms, or bob and weave, push their arms out the way, or move about, how you fight is up to you. But your opponents might use different strategies also, so you must learn how to foresee their attacks and how best to attack them.

You opponents all have the same controls as you, no advantage, no disadvantage. Except on easier levels they will have less strength - they will also have their speed and intelligence reduced.

40 different characters that have various colourful costumes and have their own special moves to learn and use. Each character has their own fighting style to fight against aswell as a perk and a weakness

So, take a deep breath, make a fist and prepare to battle your way to victory Shattered Realms is a brawler that features deep fighting game mechanics. It includes a wide variety of moves, and a flexible cancelling systems that allow players to creatively and intuitively build combos, while rewarding experimentation and style. It pits the player against challenging enemies and intelligent bosses, in both single-player and co-op modes, supporting up to four players (currently limited to two players).

While the game is intended to be played on either gamepads or Arcade sticks, we've mapped it to keyboard as best we can to match the experience:

So the most critical bit of information you need is this:We currently have controller support for XBox One, and Logitech controllers (Xinput). If you would like to use a PS4 controllers, just dowload this nifty app to have it emulate Xinput: Just remember to go into the DS4 Settings Menu and tick the "Hide DS4 Controller" option.Beyond that, you will find Lynx's full move list and more detailed mechanics on our site at- ShatteredBrawl 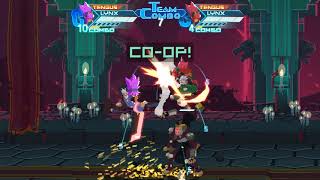 This is a fast-paced arcade-style casual fighting game. The levels are all randomly generated by the program and can be challenged forever.

Go to the next level after completing the objectives of each level.

Improve the attributes of the characters as you like.

Go back to the upper level after failure. Note to players about DEMO: We have an early demo build available to play (inspired by EGX PAX) and the game is still in production. You will still need a keyboard to exit and start your game and your game will not save. This will not be the case when the full game is released. We've been putting a lot of energy into making this game over the 4 years so please take your time to give us support and feedback! Please be constructive. This will improve our game and make it a better experience for you in the end.

Welcome to Night Light City, a dark, dystopian alien City, where four factions want the incredible powers of a Detective Hunter for their own ends. With these powers, you're able to manipulate, befriend, betray, instill fear and destroy the sentient populous. You are feared, but maybe that can change as you discover the secrets of the sentient city.

Utilise your detective skills to solve many cases and restore your reputation. Your cases will include simple to mature-themed scenarios

Experience the sentient emote system that you can use to interrogate, manipulate, terrorize or sway the odds in your favor

Put your agile and athletic body to use as you parkour, doge, slide, fight, impale, hack, absorb and hunt your prey

Engage in an epic True Film Noir, Cyberpunk story with other themes and culture to discover and explore along the way. Each case, small or big will reveal your true nature Punch A Bunch is a physics-based boxing game developed by Pontypants.

About the current build:

This is the first build ever released where you just fight against an invulnerable dummy. The purpose of this build is for anyone interested in the project to test out the controls and fighting mechanic to give feedback.

Further builds will be coming soon with more features implemented in the game.

YOU NEED A JOYPADCONTROLLER TO PLAY -

Unzip in any location of your choice 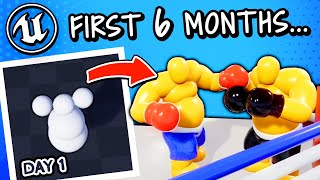