Listen and weep... These songs for sadness will help you cope with your darkest moods.

The four songs below are keepers for the crestfallen, exploring inner doubts, fears and turmoil through sensory harmony.

Best of all, listening to these sad songs might actually make you feel a bit better.

Music might not be an answer to all of life's problems, but it makes for a mood-boosting sonic tonic if used correctly.

For most people, listening to music – even music expressing negative emotions like sadness or anger – can be an effective way to deal with their emotions.

Sad music can trigger catharsis, allowing you to purge all of the negative emotions clouding your mind and move forward, refreshed.

With that in mind, give the following tracks a try. (It's ok if you cry.) A haunting reminder lapses over soothing sounds, then crawls under your skin.

"The Unfamiliar" plays like a ghastly familiar's sussurrations - icy whispers at your sides on a deathbed.

We took a metaphorical approach with it to convey the forever-building eerie tone of the film. The lyrically-driven song is also an homage to the nostalgia that the film evoked in me as a fan of The Shining and Hitchcock’s Psycho.

The grim film this masterpiece was composed for seems to fit it perfectly and the visuals of the official video do not dissapoint. 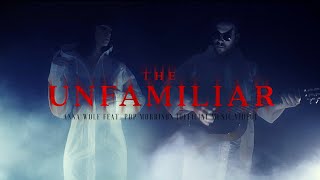 Two moods merge, making something otherworldly of anger and sorrow on a frozen sonic canvas.

Bruised drums and alien synths serve up a serene setting for explosive vocals to, well, explode all over.

The combination is fresh and inexplicably relaxing - mood-bending alchemy turned to gold, molten.

Thought I Was examines the feeling of the worst month-long hangover after a decade-long party, and a real evaluation of the horrible acts committed and how they have lead to a very miserable existence.

- Zack Dean (And He Never Came Back)

Rage against the self sends ego into orbit in "Thought I Was", abandoning the body below to explore an atmosphere of angst.

Turn up the songs above for a dose of stone-cold sorrow. Hopefully, a bit of gravity can lead you to levity.

Read all about Burwell's bewitching tune "The Beginning" next.